The XX of the title refers to the double expo­sure of a film recording my exhi­bi­tion of 3 photo series in all Hotel Seehof Zurich rooms April 2001 and Termini Tech­nici in the Trini­tatis Church Cologne, August 2001, in which Gerhard Richter first presented ​“Bridge 14 FEB 45”. ​“XX” not only discloses the absur­dity of two exhi­bi­tions jumbled together however, more is revealed with the layering of image: Chris­tian sacred and profane spaces of church and hotel bedroom are united here.

In 2001 I presented 3 photo series in the Hotel Seehof, Zurich. Photographs were displayed for 6 months in all hotel rooms, the passage­ways, in the stair­wells, the dining and break­fast rooms; all in all 91 pictures were to be seen from the series Ô d’Oriane 1997 – 2000 (13 photos), Sonata in Sea 1999 – 2000 (17 photos) and Hermes Insensed 2000 – 2001 (61 photos). Collec­tively shown as an exhi­bi­tion enti­tled ​“Insensed” the subject matter encom­passed accounts of encoun­ters from my life, some­times refer­encing the Jacob/​Angel biblical legend, some­times with literary asso­ci­a­tions, overtly or less obvi­ously connected with Shoah. All works engaged with human portrai­ture, image and text (my own or quoted texts), in digi­tally hand­written or in printed form. I docu­mented the exhi­bi­tion with photographs before the opening on April 10th.

A couple of months later I partic­i­pated in an expo­si­tion, Termini Tech­nici, at the Trini­tatis Kirche (a decon­se­crated church) that oper­ates as an exhi­bi­tion space in Cologne, Germany, for which I made two neon pieces: wrestle­with­y­ourangel & neonazi 2001; it was the first time I had presented art work in a church envi­ron­ment and the frame of refer­ence was the biblical story of Jacob and the angel, contex­tu­alised in contem­po­rary Germany with the rise in neo-Nazism.

This group exhi­bi­tion was to include a new work by Gerhard Richter: ​“Bridge 14 FEB 45”, 2000/​2001, orig­i­nally a duotone offset lith­o­graph, to be first presented in the church as a large plastic hanging, an altar­piece. Richter’s image was of a photo that Hein­rich Miess, a lith­o­g­ra­pher who has worked for Richter for many years presented to him — Miess had found the orig­inal docu­ment in the drawer of an aban­doned piece of furni­ture when he moved to new premises with his lith­o­g­raphy and print firm in Cologne. Under Richter’s instruc­tion Miess then digi­tally reworked and refined the image on computer for the edition. The photo­graph was an aerial view taken by an Amer­ican pilot just after World War II of bombed Cologne at the Bonner Strasse motorway crossing.

Termini Tech­nici was to present many other artists also, and a cata­logue ensued.

Richter who devel­oped a photo-realist style in the 1960’s had already dealt with German history in several of his art works, exam­ples being the portrait of his uncle in Nazi uniform ​“Onkel Rudi” (1965) and the ​“October series” 18. Oktober 1977 from 1988, of press cuttings with photos of the Baader Meinhof terror­ists, all the afore­men­tioned being repre­sented in paint.

In these and many other art works Richter employed the method of ​“unpainting” in which he slightly blurred the photo-realist painted image of the photo­graph, his aim being to show how the fact of docu­mented histor­ical events can be fiction­alised, when the full story, full history, has not been grasped – these images were created at a time when Germany was still in the process of reassessing the periods of the Third Reich era and post war RAF (Red Army Faction) terrorism.

On the Saturday before the exhi­bi­tion opening on the 28th August 2001, Hein­rich Miess, also a friend of mine, phoned with a tip: ​“Gerhard Richter is a shy man,” he main­tained, ​“he won’t come to the opening but he will be there to look at the show on Sunday circa 1 pm.”

On Sunday morning I went to the church equipped with my camera and docu­mented, first Eric Witschke, former pastor and curator of the exhi­bi­tion hanging Richter’s picture (with assis­tance from Stefan & Hein­rich); then Stefan Höller, a former student of Richter’s from the Düssel­dorf Academy with his easel placed in front of the altar, painting an oil of Richter’s photo­graphic work; and then Hein­rich standing outside the church with both of my neon pieces in picture and finally Richter’s visit, when all the art works were already up. Apart from myself these were the only people present and photo­graph­i­cally repre­sented in the exclu­sive preview that day.

When I devel­oped the photos of Richter and the Termini Tech­nici exhi­bi­tion I realised to my dismay that I had doubly exposed the film recording my Zurich and the Cologne exhi­bi­tions. A most curious but grat­i­fying hybrid ensued, however. The double expo­sure (“XX” of the title) on a super­fi­cial level disclosed the absur­dity of two exhi­bi­tions jumbled together; but I think that much more is revealed with this layering of image — a Chris­tian sacred and a profane space — church and hotel bedroom are brought together here.

The most intriguing images are of Stefan Höller, Richter’s eager former student seen in a clas­si­cally modernist pose with easel, captured in the serious process of copying in paint not the master’s painting, para­dox­i­cally, but a digital photo­graphic repre­sen­ta­tion of a histor­ical image as heavily loaded as the bombs that created the numerous craters so visible in the photo­graph. The tautology becomes more complex with the double expo­sure that places a hotel double bed in front of the altar suggesting a limit­less combi­na­tion of innu­endo and double entendre. Refer­ences are further layered in my photo of Höller, himself photographing Richter and the small group in the church. And the images of ladders being repeated in hotel and church, also suggested by rows of pictures hung together in ladder shape, further bring to mind the Jacob’s Ladder theme implied with my neon art works in the Trini­tatis Church.

On 14th September 2007 Cardinal Joachim Meisner (Arch­bishop of Cologne) made a contentious and widely crit­i­cised state­ment during a sermon in the Kölner Dom (the Cologne Cathe­dral); he described culture that has been sepa­rated from reli­gion as being ​“Entartet” (degen­erate), a term coined by the Nazis to depict Modernist art. Meisner was refer­ring to Gerhard Richter’s abstract stain glass window design that had been installed on September 3rd in the Cologne Cathe­dral; the Cardinal would have preferred depic­tions of biblical motifs and felt the non-repre­sen­ta­tional orna­men­ta­tion would be better placed in a mosque. Some of the press noted that Richter had till then never concerned himself with church art.1 In fact Gerhard Richter made a gift of ​“Bridge 14 FEB 45” to the Emmanuel Church in Cologne-Rondorf. This copy, a 277 x 210 cm digital print on synthetic fabric under antelio glass was produced in 2002. It has been hanging in the foyer of the commu­nity centre of the Protes­tant Church Commu­nity since December 1st 2002.

Richter, who comes from a Protes­tant back­ground, commented on his reli­gious senti­ments already in 1988:

“Art is the absolute real­i­sa­tion of reli­giosity, the ability to believe, a longing for ​‘God’. All other real­i­sa­tions of this most consid­er­able human char­ac­ter­istic are an abuse, in so far that these char­ac­ter­is­tics exploit, they serve an ideology. Even art becomes ​‘Applied Art’ when it aban­dons a specific purpose, when it tries to give a message; because only in absolutely refusing to make any state­ment does it stay human. If we however satisfy our need to believe in an ideology, we can only wreak havoc.”2

“It is out of neces­sity that we build up illu­sions that make our survival possible and there are various forms of faith and various tradi­tions that make us able to stand this being here by deluding ourselves. Anything goes here, from the shab­biest sort of super­sti­tion to the most compli­cated construc­tion of belief. (…) The golden cross is not about anything specific, it is also meant to be some­what polem­ical. On the one hand it is of course a bow with respect to our two thou­sand year history of Chris­tian culture. This is my home, my roots are here, the tradi­tion that I value highly and is much more complex than any critics can imagine.

At the time it coin­ci­den­tally came about at the same time as the prohi­bi­tion of the cross; that urged me to protest and I was glad that I had made it.”

Given the Catholic Church’s contro­versy regarding (Richter’s) contem­po­rary art I felt it would be inter­esting to consider a double take on my XX series that in fact discloses another of Richter’s church art pieces, in a Protes­tant context (if only temporarily) and re-photographed unortho­doxly by a Jewess.

Though far from abstract in design (re Meisner’s comment), Richter’s quite docu­men­tary and repre­sen­ta­tional ​“Bridge 14 FEB 45” shown in the semi-reli­gious frame­work of the Trini­tatis Church, did not depict a reli­gious scene, unless one were to read the bombed Cologne image as being apoc­a­lyptic. 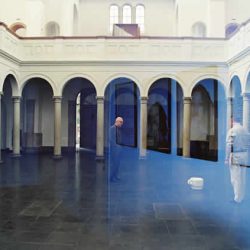 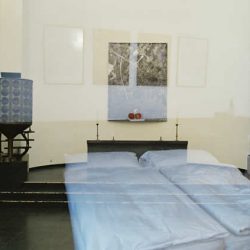