1 Noli me tangere is the Latin version of the words spoken by Jesus to Mary Magdalen, meaning ​“Do not touch me” (the quota­tion appears in John 20:17). The words were a popular trope in Grego­rian chant, and the moment in which they were spoken was a popular subject for paint­ings. Its modern English meaning is ​“Do not disturb /​interfere”.
www.websters-online-di…

A split screen video of the perfor­mance (English and German versions) was produced in 2010.

A compi­la­tion video DVD of Touch me Not (4.18 minutes) and the article Self-portrait of a Self-hating Jew (short version 30 minutes) with images was produced in 2010.

Tanya Ury wears a black blouse: the arms are tied behind her back like a straight­jacket, while she stands speech­less, bound as if gagged, and texts, with voice-over accom­pany the action, telling her expe­ri­ence of having hair that is consid­ered unusual by most people.

“The philo-Semi­tism of this gener­a­tion is paral­leled to their xenophilia, which mani­fests itself as a tendency to domes­ti­cate the foreign and treat them as pets. For example, Stefan loathes his mother’s friends’ incli­na­tion to report their latest acqui­si­tions on the Naschmarkt, obtained ​‘by my Turks, yes you said by your Turks’2(Ohnehin 175). The terms are very remi­nis­cent of Herbert Kerber’s daughter Bärbl’s affec­tion­ately intended ascrip­tion of the title ​‘our house Jew’3 to survivor Paul Guttmann, an expres­sion which harks back to the idealised Habs­burg era. Simi­larly Stefan’s friend Patrique, son of a Kinshasan diplomat, was subjected to constant stares as a child: ​‘on the tram Alp inhab­i­tants would even touch his skin and fuzzy hair, as though they had discov­ered a small beau­tiful animal, a sweet type of ape.’4​“5

On 3rd February 2009 on CNN in a programme about the new Amer­ican First Lady Michelle Obama, biograph­ical details emerged that when she studied at Prince­town Univer­sity USA, in the mid eighties, students would stroke her hair to bring ​“good luck”. I quote from the satir­ical ​“How to Rent a Negro” by Damali Ayo: ​“This time-honored tradi­tion began in the nine­teenth century, when it was consid­ered good luck to touch the hair of a black person…”6

But this kind of harass­ment is not limited to the African or African Amer­ican expe­ri­ence. The ​“Jewfro”7 also seems to inspire intim­i­dating behav­iour in unre­flecting persons. Although once when I arrived in New York 2006, while traversing the airport secu­rity zone, one of the luggage handlers, a young black guy, called out with respect: ​“Love your hair!” — a similar but very different situ­a­tion devel­oped on my arrival at the Cologne airport secu­rity check within the same year, and all male and female offi­cers began laughing at my appear­ance. One of the male offi­cials, in an effort to compen­sate for bad form or even racism, struck up a conver­sa­tion: ​“You have a very inter­esting hair­style”, he commented. My hair was styled in corkscrew curls — he was wearing his short greased hair in spikes. ​“So have you – quite an unusual hairdo”. I replied, taken off guard, and unable to react appro­pri­ately.

In certain cases, hair can be perceived as being a Jewish sign. While the orthodox Chas­sidic Jewish male styles his hair with ​“peyes” side curls, the orthodox female covers her head with a scarf or wig. The blonde wig that I wore in parts of the video/​performance Kölnisch Wasser insin­u­ated diverse symbolism, including the dangerous appeal of the blonde siren embodied in the ​“Loreley” figure (who lures sailors to their death), a Rhine Maiden also conjured in Hein­rich Heine’s poem of 1822.

From 1993 on I have been collecting my hair (from natural hair loss) daily, in small dated plastic bags, which have then been sewn together. The first presen­ta­tions of these ​“shower curtains” (delib­er­ately remi­nis­cent of the shower scene curtains in Hitchcock’s ​“Psycho”, a film with multiple refer­ences to the Holo­caust8) were combined with the Golden Showers perfor­mance docu­men­ta­tion. The refer­ence in this piece to the collected hair of concen­tra­tion camp victims was overt. In 2004, I created the first coat enti­tled Hair Shirt as part of the Who’s Boss series.

Hair often betrays ethnicity – race, and I cannot recount how often people have reacted to my hair — posi­tively, often nega­tively. Strangers try to touch my hair. This desire for the tactile expe­ri­ence was some­thing I witnessed dramat­i­cally at the City Library Münster, when the ​“shower curtains” were being exhib­ited in 1997. Although I provided a sign requesting that no one touch the exhibit, I observed how many spec­ta­tors could not but help take the plastic bags containing hair between their fingers.

Extract from Self-portrait of a Self-hating Jew, Tanya Ury 2009

After I presented my perfor­mance Touch me Not at the Bet Debora confer­ence in Sofia, Bulgaria June 2009, Toby Axelrod came up to tell me how a few years ago, on a tram in Prenslauer­berg, Berlin, she had witnessed an inci­dent involving several German youths, who were sitting near a young woman with long, curly, black hair. One of these reached out from behind to touch her hair, saying ​“I just wanted to see what gypsy hair felt like,” adding ​“isn’t it great that we live in a multi­cul­tural land!”, and began singing a nation­al­istic song about how proud he was to be German. As she reached her stop, Toby ran up to the driver’s car and gave details of the circum­stances. The driver went back to inspect the rear car, where the men were seated. Toby rode her bike up to the next tram stop, where she stopped the tram and asked the driver if he had confronted the youths. He reported that he had checked the wagon, but that he could do no more than that, since he had not person­ally witnessed anything unto­ward. Toby thought this better than having done nothing at all – at least the youths will have under­stood that they had been reported.

1 Noli me tangere is the Latin version of the words spoken by Jesus to Mary Magdalen, meaning ​“Do not touch me” (the quota­tion appears in John 20:17). The words were a popular trope in Grego­rian chant, and the moment in which they were spoken was a popular subject for paint­ings. Its modern English meaning is ​“Do not disturb /​interfere”. www.websters-online-di…

7 A Jewfro refers to a curly hair­style worn by people of Jewish descent. Its name is
inspired by the afro hair­style, which it vaguely resemb
les​.en​.wikipedia​.org/​wiki/… 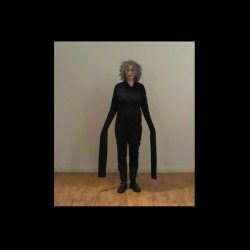 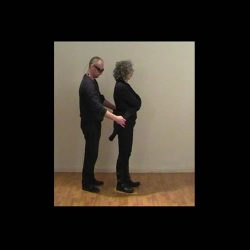 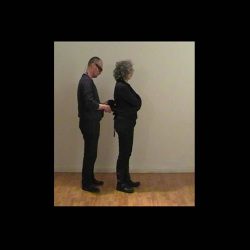 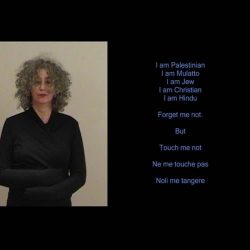 Touch me Not, video perfor­mance