The English, with their xeno­phobic wartime poli­cies, interned all male German refugees in concen­tra­tion camps, a British inven­tion dating from the Boer war last century. Jewish refugees were often impris­oned together with Nazis; the British failed to recog­nize the subtle differ­ence between the German oppres­sors and their victims. Members of my family who managed to escape Germany to England were sent to intern­ment camps as widely dispersed as the Isle of Mann, Australia, and Canada, which was where my father landed. There he acquired a US army uniform. He was wearing the khaki camou­flage jacket in Ulm after the war, while searching for his mother, when a woman who had known his family in pre-war times approached him on the street and, holding her hands to her face in amaze­ment, exclaimed: ​“If your mother could see you now in enemy uniform, she would turn in her grave.”

And so stories are told and personal mytholo­gies are created. As a teenager, I adopted the jacket. The Vietnam War was happening in 1968, and perversely, battle fatigues and army apparel became highly fash­ion­able. The symbol of freedom that the jacket had repre­sented to my father later became a popular symbol of oppres­sion; never­the­less, it was unques­tion­ably cool to own or wear one. Why didn’t we ques­tion the ethics of fashion?

Extract from Taking on the Mantle, Tanya Ury 1999

“Tanya Ury uses text, sound and image in her projects. As opposed to a theory of the form and content of the work of art, however, it is here the inten­tion of the artist that stands in the fore­ground. The artist conceives herself to be a medium, inter­me­diary between life and art. Her concep­tions are expressed, always with great effec­tive­ness, in the free use she makes of resources and possi­bil­i­ties: in the form of photog­raphy, with text, video, with sound, and instal­la­tion, in the form of audio­cas­sette, neon sign or story telling. The sources and roots of her stories are linked to cata­strophic histor­ical circum­stances. History is not just under­stood as some­thing that exists in the past. Ury’s text Tran­scending the Ladder forms part of a series, along with other inves­ti­ga­tions such as Taking on the Mantle 1999 (1) Die Gehängten/​Hung Up 1999 (2) and Building Bridges 2001 (3), which, like the selec­tion of her pictures in the text, show that the facts estab­lished by research provide the condi­tions for the fiction that is a work of art.” 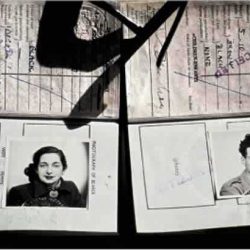