These photographs are mainly of road­work signs that display graf­fiti of swastikas and Stars of David, signi­fiers that are loaded with symbol­ical weight. The country lane, on which the street signs have been photographed, is being widened. In Mallorca, where much of the rural land­scape is being culti­vated as a building site for largely German purchasers, feel­ings run high among the natural inhab­i­tants. Mallorca is still recov­ering from the repres­sions of a fascist dicta­tor­ship that ended only a quarter of a century ago; under Franco even the Catalan language was forbidden. Now the Mallorquin people are trying to cope with a tourist industry that has taken on colo­nial propor­tions. Although the trade guar­an­tees incoming wealth, the foreign interest is for the Balearic loca­tion, not for the culture. Given this context, the meaning of the graf­fiti becomes compli­cated and less easy to encode. 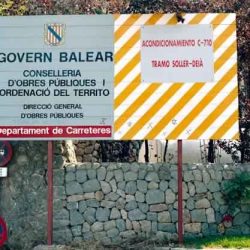