Sonata in Sea is presented as a room instal­la­tion, where a CD of Suzanne Brad­bury may also be heard.

A printed leaflet of the photo series was produced, with designer Thomas Zöller in 2001

8 colour photos of the concert pianist Suzanne Brad­bury taken by Tanya Ury in the summer of 1999 portray Suzy rehearsing at the palace of the Arch­duke Luis Salvador, Son Marroig, Mallorca. These pictures, shot within a few seconds, specif­i­cally demon­strate hand move­ment over the piano keys. The images, hang edge-to-edge on a wall reading from left to right. Hand-written poetic texts by Tanya Ury (on music paper), accom­pany the images. The eight simi­larly framed but narrower text photos, hang (also edge-to-edge) directly beneath the portraits. A final smallest photo, the title, hangs beneath the last text to the right.

The title (and text) suggest that Suzanne might be playing Chopin’s Sonata in C (minor) — Chopin is part of Bradbury’s reper­toire but in the summer of 2000, she also performed a sonata by the late Peter Ury (Tanya’s father), at Son Marroig. In the back­ground of the photographs, the concert hall is empty; reflected in the wing of the grand piano a motion­less Mediter­ranean land­scape can be seen. 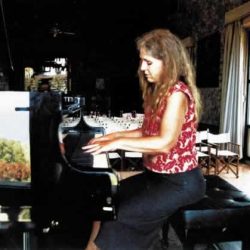 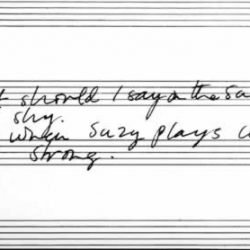