The digital visual mate­rial of this DVD was trans­ferred from a VHS copy of super 8 films taken by the Ury and Unger fami­lies between the years 1953 and 1969. The orig­inal films went missing, along with the entire Ury and Unger family archives, when the Histor­ical City Archives in Cologne, Germany, collapsed on 3rd of March 2009.Two and a half years on, the Archive author­i­ties informed the Ury family of the recovery of some of their mate­rial, including super 8 films.

A narra­tive­less version of ring o’ roses with music sound­track selected by Alan Bangs was put together for Tanya Ury’s 60ieth birthday party 1st October 2011, the track being an arbi­trary mix, not designed to corre­spond specif­i­cally to image sequences.

It is unusual for anyone to have made so many home movies at the time, from the mid 50’s to the early 70’s. This mate­rial, collated by the Urys and Ungers in Britain not only docu­ments family and school gath­er­ings but uncom­monly also travel in Europe and the Middle East. It is the personal life record of 4 gener­a­tions of a Jewish survivor family from not long after the Holo­caust. ring o’ roses is however, also a social docu­ment revealing for instance, footage of lunch in Sa Fonda with Robert Graves and his son Thomas, in Deià, Mallorca 1957; like­wise, glimpses of East Berlin, at a histor­i­cally preg­nant point in 1961, are included, with a visit to the composer and family friend Andre Asriel, at his apart­ment, the Frank­furter Tor, at the top of one of the two Frank­furter Towers.

The video title was suggested by the repeated imagery of chil­dren and adults dancing in the round.

The writing on the wall is the writing in the sand, washed away by the tide, dancing through a glass…

We all fall down

A singing game in which chil­dren join hands and dance round in a circle singing.

“The invari­able sneezing and falling down in modern English versions have given would-be origin finders the oppor­tu­nity to say that the rhyme dates back to the Great Plague. A rosy rash, they allege, was a symptom of the plague, posies of herbs were carried as protec­tion and to ward off the smell of the disease. Sneezing or coughing was a final fatal symptom, and ​‘all fall down’ was exactly what happened.” Peter and Iona Opie

The line Ashes, Ashes in alter­na­tive versions of the rhyme is claimed to refer vari­ously to crema­tion of the bodies, the burning of victims’ houses, or black­ening of their skin, and the theory has been adapted to be applied to other versions of the rhyme. en​.wikipedia​.org/​wiki/… 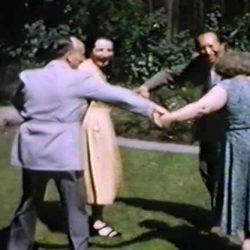 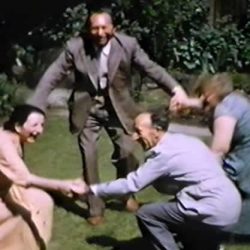