Action on the Danube — Budapest, 25th July 2006 at 18 hours 6 pm
Docu­mented with photographs by Istvan Javor

25th July 2006 at 6 pm in Budapest, next to the Holo­caust memo­rial ​“Iron Shoes on the Shores of the Danube” and its offi­cial plaques, a small group of 20 Budapest Hungar­ians, Rabbi Tamas Vero, who said a prayer and myself, set a small, unof­fi­cial plaque with the wording (in Hungarian):

“In memory of the Jewish citi­zens who were shot into the Danube by Hungarian fascists in 1944.”

At the time family groups were tied together by the legs with wire, lined up on the edge of the Danube. After one had been shot, they all fell into the water.

I visited Budapest for the first time in June 2006 (to prepare for my exhi­bi­tion at the Tüzrakter Inde­pen­dent Cultural Centre 26th July – 9th August). Katalin Pecsi of the Holo­caust Memo­rial Centre showed me the ​“Iron Shoes” and told me of Judy Cohen’s vain efforts to have the plaque’s omis­sions offi­cially recti­fied. The glaring absence of the victims’ names was some­thing that I felt had to be dealt with imme­di­ately, if not unof­fi­cially. I decided to initiate the action Naming no Shaming, the setting of a plaque iden­ti­fying the victims.

According to histo­rian, Tamas Kovacs Roma people, Jehovah’s Witnesses, members of the resis­tance were arrested by the police, then executed after trial or sent to concen­tra­tion camps etc. The shoot­ings committed by the Arrow Cross Nazis were spon­ta­neous actions, without exact lists of ​“target people” — some 4,500 Jewish victims were driven out of build­ings nearby, the so-called ​“protected houses” near the Danube (in the Ujlipot­varos neigh­bour­hood), with a speed and effi­ciency unprece­dented by German fascists. There are no exact lists of the people who were killed there, or who somehow survived. We now only have a few testi­monies and ​“untold stories” of survivors. eszter​taska​.blogter​.hu

In May 2005 Judy Cohen visited Budapest and had an oppor­tu­nity to visit the new Holo­caust memo­rial instal­la­tion: ​“Cipök a Duna­parton” ​“Iron Shoes on the Shores of the Danube” by Gyula Pauer after the design of Hungarian theatre director Can Togay, unveiled in the summer of 2005: www​.pauer​gyula​.hu/​c​i​p​o​k​/​C​i​p​o​k​a​D​u​n​a​p​a​r​t​o​n.htm. On the website photographs, inap­pro­pri­ately, only Chris­tian clerics giving a blessing for the Jewish murdered are to be seen.

“I believe this is an imag­i­na­tive, immensely moving and very appro­priate tribute to those Hungarian Jewish citi­zens who were shot into the Danube by the Nyilas terror. I, as a survivor of Auschwitz-Birkenau, was completely astounded and gravely disturbed that the three plaques, in three languages, omitted to mention the iden­tity of the victims.” Judy Cohen, (née Weiszen­berg) Formerly of Debrecen, Exec­u­tive member of the Toronto Holo­caust Memo­rial and Educa­tion Centre, Editor: www.womenandtheholocau…

Over the last year Judy Cohen wrote to various offi­cial addresses in Budapest, including the memo­rial artists, who also agreed that new plaques should be made where the victims are specif­i­cally mentioned and not just their brutal murderers, the Arrow Cross Mili­ti­amen.

No one under­took anything to offi­cially change the inscrip­tion on the plaques at the time. What’s more, three days after our action the new plaque disap­peared, prob­ably in the same way as some of the ​“Iron Shoes” that had been thrown into the Danube. I hope that the Naming no Shaming plaque like the shoes will be also replaced this time offi­cially. 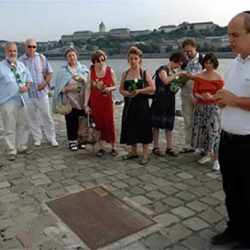 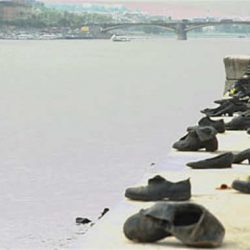