The polit­i­cally provoca­tive histor­ical and contem­po­rary images and texts are an ensemble of photographs, video, neon signs, news­paper cuttings and other mate­rial, collated together by the artist Tanya Ury in Germany and Mallorca over a period of six years. The title ​‘Jacob’s Ladder’ refers to Jacob of the Old Testa­ment.

The closing event to Tanya Ury’s exhi­bi­tion Jacobs Ladder first presented in the Hochbunker Cologne-Ehren­feld, (D) occurred on 09.11.2002, the anniver­sary of Reich­skristall­nacht. The bunker was built on the site of a syna­gogue, which had been destroyed on Reich­skristall­nacht, 1938.

“He dreamt that he saw a ladder, which rested on the ground with its top reaching to heaven, and angels of God were going up an down it.” New English Bible, Genesis 28 (12)

Twenty years later Jacob again had a vision; this time he wres­tled with an angel.

Jacob’s biblical fight with the angel and the ladder to heaven, are the orig­inal sources of inspi­ra­tion for the various art works contained within the exhi­bi­tion.

There are few dreams in books. It’s as if they have a bad repu­ta­tion. There are fewer and fewer of them. Dreams used to occur in all the great books – in the Bible, in epic poems, in Greek liter­a­ture, in the Baby­lonian epic poems, in Shake­speare – in an archaic mode, then they became more remote. I asso­ciate this increasing remote­ness, this desic­ca­tion, with the dimin­ish­ment of other signs. In the same way we find:
less and less poetry
less and less angels
less and less birds
less and less women
less and less courage
Jacob wakes up, he gets up. What becomes of the ladder?
You have to take a rock, put it under your head, and let the dream ladder grow. It grows down – toward the depths. 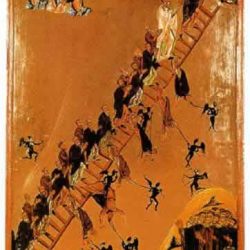