Hornet’s Nest is an object, consisting of a wasp’s nest mounted under a bell jar, on which texts have been engraved.

In 2012, the choco­late company Ritter Sport conducted a large inter­na­tional online adver­tising campaign for which the public might select slogans for their prod­ucts. In Germany, the following slogan won with 61% of the near 4,000 votes: 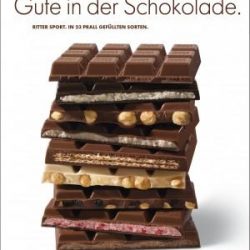 I saw the large-format poster for Ritter Sport choco­late for the first time at the Cologne Central Railway Station on 13th April 2013. This adver­tising hype, remi­nis­cent of a frequently quoted passage by Anne Frank, certainly caught my atten­tion:

It’s really a wonder that I haven’t dropped all my ideals, because they seem so absurd and impos­sible to carry out. Yet I keep them, because in spite of every­thing I still believe that people are really good at heart.
Saturday, 15th July 1944, second sentence of entry on p. 237, ​“Anne Frank: The Diary of a Young Girl” Bantam Books: New York. 1993, www​.quotez​.net/​g​e​rman/…

The text engraved on the bell jar of Hornet’s Nest reads as follows:

Karola Fings, the assis­tant Director of the Nazi Docu­men­ta­tion Centre in Cologne, presented the wasp’s nest to me in June of 2011, when I was visiting, to help in the garden, at her weekend house, outside Cologne. She had discov­ered the nest, so similar in appear­ance to a hornet’s nest, in the eaves of the ​“datsha”, which she and her husband were reno­vating.

The idiom ​“a hornet’s nest” (in German ​“Wespennest” – wasp’s nest) describes a highly contentious situ­a­tion, as is the Ritter Sport adver­tising campaign of 2013, in which the most commonly quoted words of Anne Frank have been profaned; Frank, the Jewish diarist, died of typhus aged 15 years, in the Bergen-Belsen concen­tra­tion camp March 1945.

Frank was a teenager, who had expressed words of faith in the German people despite the fact that she was being starved to death in a German death camp. An adver­tise­ment for choco­late mimic­king her state­ment is there­fore partic­u­larly crass. How can the Ritter Sport Company have over­looked this discred­iting? Is it plau­sible that they have acted in good faith? Thou­sands, who voted for the afore­men­tioned slogan in Germany, were possibly of a younger gener­a­tion, distanced to the events of the Holo­caust by nearly 70 years but such igno­rance still amazes — at a time where neo-Nazism is on the rise in Germany again, one would hope that the public were more vigi­lant.

The adver­tise­ment campaign cele­brated Ritter Sport’s 100-year jubilee. Many Germans, who were obvi­ously also of the suggested asso­ci­a­tion, placed the following comments on the website blog www​.ritter​-sport​.de/bl…. (Trans­la­tion from German by TU):

Chris­tian Kravanja says 8th November 2012 at 11.42 — I like it when your posters have a certain linguistic joke! There are some good ones there, I voted for them straight away!

Michaela says 8th November 2012 at 11.43 — Ritter Sport is right always, every­where and for any occa­sion.

PeterP says 8th November 2012 at 11.44 – The choice was not easy. Taste-wise they are unpar­al­leled, one would like to eat all of them, forget oneself in choco­late dreams, stuff one’s mouth, fall in love with coconut, eat the small vari­eties, teach chil­dren the history of choco­late, sink into the sofa with mousse, nuts and full-cream milk, call over friends to feast and nosh and I think – snacking is what I want to give as presents for Christmas!

Jenny says 8th November 2012 at 11.44 – 1. We believe in The Good in Choco­late — says more to me than the other slogan! 2. Giving the greatest plea­sure from the earliest age – that is really what I feel, the little bars give great plea­sure! 🙂 3. The most diffi­cult thing about the 250 g bars is to resist them. It’s funnier than the other slogan. 4. We’ve got your taste. Best wishes. I like that best. 5. Coconutty – funny word­play. 6. Don’t stand too close to the plat­form edge – they taste deli­cious. That was the funniest slogan. 7. Yoghurt – it’s funnier, I prefer the poster design and I prefer choc with yoghurt to cocoa mousse.

nicky says 8th November 2012 at 11.44 – ritter sport is simply the best in choco­late. I love to eat alp milk choco­late together with a glass of milk:-) I still like the posters a lot :-)br /​>
Heike says 8th November 2012 at 11.46 – Ritter Sport has been part of my life since I was a child, first in the favourite ​“West Packet” pack­aging, mostly for Christmas and later on all the year round – now and again ​“differ­ently” deli­cious!

ursula lethen says 8th November 2012 at 11.50 – I found the voting great because customers for a change, also take part in adver­tising, for a change,.

Carmen2401 says 8th November 2012 at 11.58 – The slogan about the falling down on a station plat­form (of pieces of choco­late) is genius, I really had to grin at the thought ;-). One way or another I’ve been amazed at the amount of new vari­eties you think up, year after year and each one is more deli­cious and unusual that the last! There are few compa­nies that offer such a diver­si­fied assort­ment, respect! Keep it up!

Pampolina says 8th November 2012 at 12.00 – with ritter sport there is always some­thing for every­body – once a day or even more often – you can also share –

Rebecca Schmitt says 8th November 2012 at 12.40 – Ritter Sport is simply the best choco­late. Just sooooo many vari­eties in taste… keep it up!!!

melanie says 8th November 2012 at 12.51 – We believe in The Good in Choco­late fits exactly because its true. Feeling good is part of it because choco­late makes you happy. Oh dear, I think I’m too late. Oh well, I’m voting anyway.

Sandra Mill­brett says 8th November 2012 at 13.24 – All the slogans are just great. You’d do best to just enjoy a bar of Ritter Sport and have a gut reac­tion

Kally says 8th November 2012 at 14.31 – Coconutty is my absolute favourite! Simple and catchy! Can’t wait to see the poster on Hamburg main station and grin.