For the première in the Kunst­palast Düssel­dorf 24.2.2011 Ury played back the video-instal­la­tion and read the text unsyn­chro­nised.

These unorthodox poems are a compi­la­tion of words, thoughts that routinely run through the mind, usually discarded, forgotten — a stream of uncon­scious notated; the sounds of words, onomatopeia re-inter­preted, their meaning decon­structed; words read or heard, misread, misheard, slips of the mind, word­play, poems that write them­selves; all put together so that a different sense may be intu­ited.

“And what of uncon­scious mean­ings, which are by defi­n­i­tion not delib­er­ately intended? ​‘I really do think with my pen’, Wittgen­stein observes, ​‘because my head often knows nothing about what my hand is writing.’”

Tanya Ury commenced writing the bi-lingual half dimen­sional poems Xmas 2009. This collec­tion of one-liners was continued in 2010, during the time of break­down, discovery, treat­ment for breast cancer, falling in and out of love, break­down again. The 28 poems were completed a year later, New Year 2011.

“Certain slips of the tongue in the course of a phrase give us sudden insight into ourselves by substi­tuting one word for another, and the unwel­come word is ameans whereby poetry escapes and perfumes the phrase. These words are a danger to the prac­tical under­standing of discourse. In like manner, certain acts. Faults some­times – they are deeds – produce poetry. Though beau­tiful, these deeds are none the less a danger.”

An example of this phenom­enon is to be found in Genet’s text:

“Darling is merely a fraud (‘an adorable fraud,’ Divine calls him), and he
must remain one in order to preserve that appear­ance of a rock walking
blindly through my tale (I left out the d in blindly, I wrote ​‘blinly’).* The
words in italics do not appear in the revised edition. (Translator’s note.)”

In its style and inten­tion the concrete poetry is a collec­tion of jumbled, abstract ideas that reflect the day-to-day life and mood of the artist. Above all, it is impro­vised and written down imme­di­ately — in essence it is auto­matic writing. 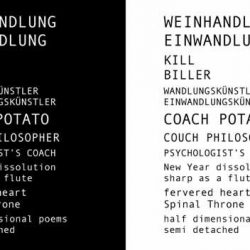 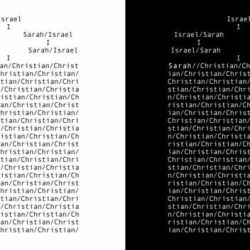 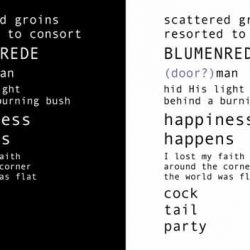 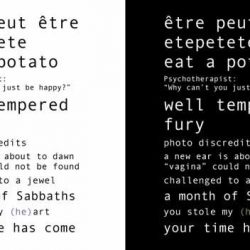