The orig­inal filmed mate­rial for False Premises was taken from a super 8 docu­men­ta­tion, filmed by myself, of a self-build house project under­taken by myself and my former husband, at Swal­low­fields, Totnes, South Devon, England during 1983 – 86. The video was completed by the artist as part of the Colin Walker Fellow­ship in Fine Art at Sheffield Hallam Univer­sity 1991 – 92.

The title False Premises alludes to the phrase ​„false premise“, a false assump­tion but also to the ​“false promises” in this case, of a house and home.

Seven stories, spoken by a man and a woman deter­mine the struc­ture of the video and contrast with the filmed docu­men­ta­tion of the construc­tion of a house. Consec­u­tively numbered titles refer to parts of the body and partic­ular rooms in a house.

The abuses of power behind closed doors in the privacy of the family home are laid bare, mirroring wider abuses in society at large, such as colo­nialism and occu­pa­tion of land. The stories imply the multiple alien­ation of a Jewish woman by the domi­nant, and her own culture.

The script to False Premises prof­fers so many exam­ples of word­play, a Jewish (Kabbalist) tradi­tion, that the German trans­la­tion, under­taken in 2007, 15 years after the comple­tion of the video, was no easy venture:

Buried in the uncon­scious was the genetic

Memory of exile and death1

In the base­ment that didn’t exist, she defe­cated;

But she was so consti­pated that it was no use.”

The word evac­u­a­tion refers here not only to enforced emigra­tion, but also to the emptying of the bowels.

In False Premises, the 7 stages of devel­op­ment (regarding the building of this house) relate to the 7 chakras of the body in Hindu and Buddhist reli­gious philos­ophy; the Kabbal­istic tree of life, from the Jewish tradi­tion, has however, 11 stages although the Kabbal­istic tree of life named Jacob’s Ladder, 292. All these philoso­phies have pre-occu­pied me at various stages of my life.

Quota­tions cited in the video script are chiefly from biblical sources but there is also a dybbuk story, from Italy of the 16th century, telling of a young Jewish woman whose body has been taken posses­sion of by a bad spirit3. My own accounts are not mystical happen­ings, but symbolic acts based on true stories of my expe­ri­ence within a Jewish nuclear family, in partic­ular inci­dents that were kept under the covers, although it is gener­ally known that 1 in 5 cases of abuse occur in the house­hold.

In a later account of the video, where toma­toes are discov­ered growing in human excre­ment at the back of a cave, abuses on a global scale are implied, with specific allu­sions to Israel.4

At regular inter­vals during the video, breaking up the sequence of the visual narra­tive, one sees the black and white images of my feet walking in sandals. This metaphor reflects the intro­spec­tion advanced by the Mosaic prohi­bi­tion of the image but also of the ​‘Wandering Jew’; some­times in slow motion, filmed from above, feet are seen walking forwards but also always away — from the promise of a home.

Within Chinese philos­ophy the top line of the I Ching, often over­shoots. Commen­su­rate with this idea, the final story in False Premises is of a German turn of the 20th century painter5. He is repre­sented here by a golem6; although his inten­tions are lofty, he isolates himself from society, prefer­ring to commu­ni­cate only through his art.”

1 From Ury’s devel­op­ment notes for False Premises, 26.4.91: ​“In a TV series currently being screened, Wistrich says that the notion of genetic memory and differ­ence was used by the Nazis as a reason for the Final Solu­tion since it could not be expected of the Jew ever to be able to assim­i­late or inte­grate.”

3 In Kabbalah and Euro­pean Jewish folk­lore, a dybbuk is a mali­cious possessing spirit, believed to be the dislo­cated soul of a dead person. Dybbuks are said to have escaped from Gehenna, a Hebrew term very loosely trans­lated as ​“hell.” Or may have been turned away from Gehenna due to trans­gres­sions too serious for the soul to be allowed there, such as suicide. The word ​“dybbuk” is derived from the Hebrew דיבוק, meaning ​“attach­ment”; the dybbuk attaches itself to the body of a living person and inhabits it. According to belief, a soul that has not been able to fulfill its func­tion in its life­time is given another oppor­tu­nity to do so in the form of a dybbuk. It will leave once it has accom­plished its goal, some­times after being helped. Basi­cally, a Dybbuk is a Jewish Trick­ster. en​.wikipedia​.org/​wiki/…

4 From my devel­op­ment notes for False Premises, 26.4.91:”’Next Year in Jerusalem’. Israel, the dream that every Jew over the centuries has nurtured, has now become an absur­dity – not only is there not enough room to house the flood of Russian Jews (the largest world popu­la­tion of Jews are Russian), as I heard (the writer) Jakov Lind say: if all the Jews were in one place it makes them a target for anni­hi­la­tion thus real­ising Hitler’s Final Solu­tion; and finally, the dream has become a night­mare because of the Pales­tinian issue, which is not being resolved through domi­nance of Right Wing poli­tics in Israel and will remain to be the sting in the tail of the Dream.”

5 Suggested is Lesser Ury, although his name is not overtly mentioned in the script.

6 The earliest stories of golems date to early Judaism. Adam is described in the Talmud (Trac­tate Sanhedrin 38b) as initially created as a golem when his dust was ​“kneaded into a shape­less hunk”. Like Adam (whose name liter­ally means ​“earth,”) all golems are created from mud. They were a creation of those who were very holy and close to God. A very holy person was one who strove to approach God, and in that pursuit would gain some of God’s wisdom and power. One of these powers was the creation of life. No matter how holy a person became, however, a being created by that person would be but a shadow of one created by God. Early on, the notion devel­oped that the main disability of the golem was its inability to speak. In Sanhedrin 65b, is the descrip­tion of Raba creating a golem using the Sefer Yetzirah. He sent the golem to Rav Zeira; Rav Zeira spoke to the golem, but he did not answer. Said Rav Zeira, ​“I see that you were created by one of our colleagues; return to your dust.” It is said that if a golem were made able to speak, that would give it a soul, and — because a golem cannot be made perfectly — that ability could make it very dangerous.
en​.wikipedia​.org/​wiki/… 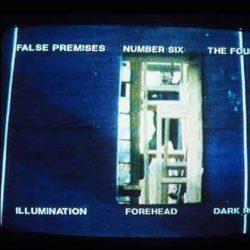 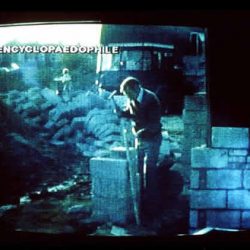 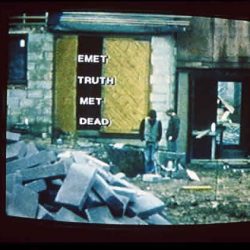 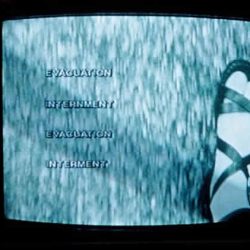 Special thanks to Michael Lawton for German biblical cita­tions