To the left of the photo­graph Du bist Einstein, the artist Tanya Ury is featured with a pipe; she faces the viewer but gazes to the right. Digi­tally incor­po­rated into the photo­graph on the right side of the picture, is a portrayal of Albert Einstein himself, also with pipe not a double, as in Ury’s artwork doo bee doo. In this double portrait, Ury also dresses and poses simi­larly to Einstein however — she mimics his facial expres­sion of a half-smile.

Einstein was born in Ulm, as were Tanya Ury’s Jewish grand­par­ents Sigmar and Hedwig (neé Ullmann) Ury, who later fell victim to the Nazis. In 1993, Tanya Ury, second-gener­a­tion who was born in London however, acquired British/​German dual-nation­ality, the year when she also moved to live and work in Germany.

The title Du bist Einstein refers to the poster featuring an Einstein double, part of the TV campaign ​“Du bist Deutsch­land” (You are Germany). Shortly before the German general elec­tion in 2005, this campaign aimed to instil a patri­otic, feel-good factor. That Einstein was chosen to repre­sent a modern German ideal is ques­tion­able because in 1933 Einstein, who was Jewish, had to flee Germany to the USA. 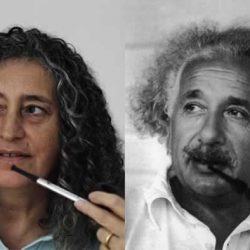 “…Tanya Ury’s photographs ​„Du bist Einstein“ and ​„or else“ insis­tently but at the same time with humour concern them­selves with ques­tions of iden­tity. With these, she posi­tions recre­ated photographs next to the orig­i­nals…”