The photo­graph depicts an extract of an article from an English news­paper of Summer 2002 about the state of conflict in the Middle East. There was no accom­pa­nying picture; the message in stark words suffices to suggest images of an oppressed and desperate people, the Pales­tinians who bring death by violence to them­selves and any Israelis in the vicinity. These, with equal exas­per­a­tion revenge them­selves by destroying Pales­tinian homes and further displacing a people in their own land.

But the article has been rendered absurd due to a printing error; a letter ​“c” has replaced a ​“b” making of the term ​“suicide bomber”, ​“suicide comber”. What should have been news cliché has become a surreal message.

A beach­comber is someone who searches the beach for hidden trea­sures. If one’s thoughts were to run in line with the ideas evoked by the printing error, one would ask oneself whether a group called the ​“suicide combers” might now be oper­ating in the war zone and if so, whether they were Pales­tinians who comb the ruins of their destroyed homes for clues, remains of a previous exis­tence, or who search the streets for human remains? Could they be terrorist recruit­ment offi­cers or alter­na­tively the preven­ta­tive measures for terrorism? The stereo­typ­ical language usually employed by the media serves to ensure accep­tance of the facts of war so that the reader no longer ques­tions the events described. One spelling mistake achieves such disrup­tion that meaning is exploded; the reader is then called on to adopt his own posi­tion in making sense of the event. 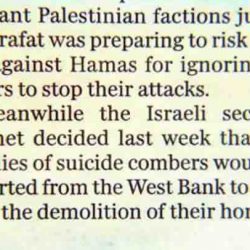