A DVD compi­la­tion of all the ​“Avant-Garde Dating” trailers with German subti­tles, 40 minutes was put together 2009

Avant-Garde-Dating – a collec­tion of works:

Avant­garde Dating an intro­duc­tory talk was written by Ury for this project. The concepts for Broken Glass 1 & 2 (performed twice during the week), Climacter, Game & Match, were by Tanya Ury; these pieces were devel­oped and performed together by Tanya Ury and Laurel Jay Carpenter. Zucchini was conceived and performed by Ury alone. The Danaids is a purely collab­o­ra­tive work by Carpenter/​Ury.

New Life Shop Art Gallery was estab­lished by Wooloo Produc­tions to repre­sent, describe and inves­ti­gate contem­po­rary Nomadism. As the first project in their programme, Avant-Garde Dating exam­ined stereo­types of part­nering in the increas­ingly common land­scape of online, long-distance match­making.

Since early 2007, the website www.AvantgardeDating.c… has accepted appli­ca­tions from 150 artists around the world wanting to be matched in new, chal­lenging couples. Out of matches from more than 30 coun­tries, three couples were invited to Berlin to meet and work together for the first time. Each artist trav­elled there and lived in the New Life Shop Art Gallery with his or her partner for one week.

On display in the gallery space, the artists explored the mech­a­nisms of a rela­tion­ship begun in the presen­ta­tional envi­ron­ment of the Internet. Wooloo posed the ques­tion: Do the webcams, blogs and online profiles of our culture consti­tute a surren­dering to the control­ling gaze – or are we rather witnessing a shift in the dynamics of power?

All matches were made online by the artists/​curators of Wooloo Produc­tions: Sixten Kai Nielsen & Martin Rosen­gaard, the jury: Tanja Ostojic, Raul Zamudio and Karen D. Peters.

Preferred gender and age of your match — if any (other­wise ​“none”): None

I would like that the person I seek under­stands the impor­tance of trying to live in the breath of eternal life. This person cares about the world and people and this is expressed in their art as activism.

This was the submis­sion made by Tanya Ury to the Avant-Garde Dating ​“contest”, April 2007, along with a Wooloo website of her work under the pseu­donym ​“Loreley” (an alter-ego that she adopted in the mid-nineties):
www​.wooloo​.org/​L​o​reley…
www​.wooloo​.org/​l​a​urelj… was the coin­ci­den­tally very similar Wooloo website link of Laurel Jay Carpenter, whom the jury teamed up with Ury to spend the resi­dency in the New Life Shop Art Gallery, Berlin.

Ury and Carpenter later asked Tanja Ostojic what moti­vated her to bring them together:
​“I enjoyed the evening of reviewing appli­ca­tions for the Avant-Garde Dating. I placed the ones I found inter­esting on my desktop and tried to find out with whom they could best be matched up… Out of all the appli­cants I found your (Tanya Ury) and Laurel’s (Laurel Jay Carpenter) body of work, methods you use and posi­tioning very inter­esting indeed, femi­nist, polit­ical and very unique. It wasn’t going to be easy to match you with others… But my intu­ition suggested that the two of you together could have a very inter­esting and deep exchange and more­over an inspiring influ­ence upon each other whether in creating some­thing new, indi­vid­u­ally, together or by giving each other the chance to reflect on previous work… Besides that there were few people amongst the candi­dates who were looking for a soul match rather then for someone from an exact age cate­gory, a member of the oppo­site sex or a gay coupling… This convinced me addi­tion­ally… And when I saw your joint perfor­mance and heard some of your impres­sions about the joy of exchange you had and the opening up that has happened in your work, I think it was a great match…” Tanja Ostojic, 29.10.2007

After the initial meeting Laurel suggested deco­rating the walls of the gallery with the entire printed out email exchange between Wooloo and this couple of artists over the previous 6 months. In their exchange Carpenter and Ury discov­ered common themes; the corre­sponding printed out images were also displayed: Laurel at the machine sewing her impos­sibly long red dress (combining many donated red dresses) for the perfor­mances Red Woman and Red Crest — Tanya like­wise machine-sewing small plastic bags containing her hair for Whos Boss: Hair Shirt. Laurel Jay Carpenter’s photo Cervix taken when she was working as a Gynae­co­log­ical Teaching Associate1 was also presented together with Tanya Ury’s Blue Danaé 1, a photo­graphic image of her outer geni­tals covered in gold leaf (the work was made as reac­tion to the discovery in the late 1990’s that Swiss banks had 50 years previ­ously received the equiv­a­lent of $6 billion of Nazi Gold and secretly hoarded it from that time onwards).

There were few visi­tors to the gallery after the opening but Tanya Ury invited the public to her 56th birthday party on October 1st, during which Carpenter and Ury also presented two perfor­mance works.

When the week was over, traces of the couple’s activ­i­ties remained on the gallery walls in the form of wine splashes.

In fact they did not spend this week alone together in the gallery because not only were both the Wooloo artists/​curators Sixten Kai Nielsen and Martin Rosen­gaard around or in the Gallery office, working most of the time; Simon Hoegs­berg was also constantly taking photos and giving inter­views for a Danish maga­zine. Tanya Ury had more­over brought assis­tant Menachem Roth along to docu­ment the proce­dures with video camera. Ury cheated some­what further­more by taking a hotel room near the gallery to shower in (which Laurel also did a couple of times) and wash clothes – Tanya slept over there a couple of times…

Tanya Ury and Laurel Jay Carpenter did create an abun­dance of new perfor­mance work (in English) during their stay, most of which was video-docu­mented.

1 ​“That cervix photo was actu­ally taken for a poten­tial artwork, never real­ized. (Photo by: MARA TRACHTENBERG.) It was able to come about because of my work as a Gynae­co­log­ical Teaching Asso­ciate in which specially-trained laywomen provide a manda­tory work­shop for 2nd year medical students and nurse prac­ti­tioners and prac­ticing Physi­cian Resi­dents teaching them how to provide thor­ough, respectful and comfort­able breast and pelvic exams on our own bodies. GTAs serve simul­ta­ne­ously as the models and the instruc­tors. From this expe­ri­ence I was able to teach Mara to insert the speculum to get the photo. I think it would be dated 2003.” Laurel Jay Carpenter, from an email of 7.10.2007 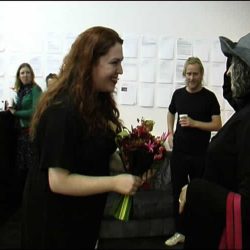 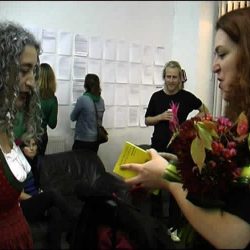 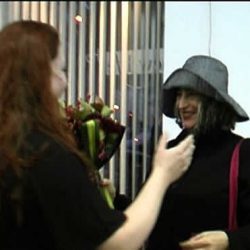