Artistic Freedom No. 2, as A4 print in 5 port­fo­lios, for sale with other photos of the Lost in Inte­riors exhi­bi­tion, Berlin (D)

These 9 photographs, taken on the premises of a former Stasi prison in Berlin, are also digi­tally collaged self-portraits, in which Tanya Ury appears twice, once as perpe­trator and again naked, as victim. Inti­ma­tions point in several direc­tions: the divided self in a Germany divided after a right wing tyranny and reunited after an auto­cratic left wing dicta­tor­ship – the stranger in me, within us…

In May 2013, I attended ​“Lost in Inte­riors”, a photog­raphy work­shop with the unique oppor­tu­nity to docu­ment on the premises of the former Stasi (state secu­rity) inter­ro­ga­tion prison Hohen­schön­hausen, in East Berlin.
​“Docu­ments found after the Wall fell reveal metic­u­lous plans current throughout the 1980s, for the surveil­lance, arrest and incar­cer­a­tion of 85,939 East Germans, listed by name.”1
On the first of the 3‑day work­shop partic­i­pants, along with other visi­tors to the deten­tion centre, were shown a film, outlining the history of the GDR and its régime of terror. This was followed by a tour of the penal insti­tu­tion with a guide, Harry Santos, who had been impris­oned there for 2 years, as a 27-year-old.

Having heard our guide’s story, told with an inten­sity and pathos that I have rarely witnessed, I rearranged my ideas for the photo shoot on the following day. My orig­inal inten­tion had been to parody the concept of a West German photo work­shop in a Stasi prison. However Santos’ testi­mony and the somatic expe­ri­ence of treading the corri­dors and four walls, where intel­lec­tuals had been incar­cer­ated, moti­vated me to attempt to create artwork worthy of the internees and their trauma. I decided rather than to simply record the loca­tion of torture by the Socialist Unity Party of Germany (1949−1989), I would stage photo­graphic re-enact­ments, in which I would appear as perpe­trator and victim: in each image I perform the part of prison guard or inter­rogator wearing the mili­tary look, fashion camou­flage but also again naked as the pris­oner victim.
​“Mielke’s appa­ratus, directed largely against his own coun­trymen, was one and a half times as big as the GDR regular army.
After the Wall fell the German media called East Germany ​‘the most perfected surveil­lance state of all time’. At the end, the Stasi had 97,000 employees – more than enough to oversee a country of seven­teen million people. But it also had over 173,000 informers among the popu­la­tion. In Hitler’s Third Reich it is esti­mated that there was one Gestapo agent for every 2000 citi­zens, and in Stalin’s USSR there was one KGB agent for every 5830 people. In the GDR, there was one Stasi officer or infor­mant for every sixty-three people. If part-time informers are included, some esti­mates have the ratio as high as one informer for every 6.5 citizens.“2
The pris­oners at Hohen­schön­hausen were polit­ical — psycho­log­ical inter­ro­ga­tion methods had been designed to break down the person­ality so that these writers, artists and musi­cians, would forth­with desist from polit­ical activism. Santos suggested that it worked. During inter­ro­ga­tion, ques­tions were not neces­sarily rele­vant: ​“They were unstop­pable in their goal to achieve water­tight confes­sions. (…) Better you behaved your­self”, he assured us and: ​“people who shouted imme­di­ately got extra time.” Harry admitted he had been no hero.

The docu­men­tary film revealed the use of an X‑ray machine posited behind an inter­ro­ga­tion chair – ca. a hundred pris­oners, who had been exposed to radioac­tivity, later died of leukaemia. The East German dicta­tor­ship autho­rised torture; in some cells, lighting remained on day and night. Other cells were inhab­ited by several pris­oners, sleeping together on a wooden pallet, without mattresses; they were not permitted to lean or lie down; should they disobey, lights were turned off. In Harry Santos’ words, fear was absolute because they did not know what was coming next. People were drugged in the prison hospital. Santos showed us a room in which water­boarding took place and he told us of mock execu­tions with blank ammu­ni­tion. ​“They don’t leave any visible traces. You can’t prove it happened.”

On arrival, whether male or female, all detainees had to strip naked, and undergo a body search; they were regu­larly taken into corri­dors to stand naked with their arms leaning against the walls for long periods of time. A segment of histor­ical film in the docu­men­tary ​“Zentrale des Terrors“ (Head­quar­ters of Terror) by Helmuth Frauen­dorfer and Hubertus Knabe 2003, demon­strated a woman pris­oner being secretly filmed while undressing.

The photo series remem­bers abuse that took place in Hohen­schön­hausen, Germany some 25 years ago, but reminds also of insti­tu­tion­alised torture and humil­i­a­tion that is still common prac­tice in many parts of the world today – the images are a salute to the scan­dalous photos coming out of the US deten­tion camp in Abu Ghraib, Iraq 2004.

I call the series Artistic Freedom, because it points to the freedom denied polit­ical pris­oners held at Hohen­schön­hausen. But here, I also allow myself artistic freedom, that is poetic license, when I re-enact the roles of perpe­trator and victim in these envi­rons. My moti­va­tion was also to better under­stand the behav­ioural constructs furthered by this and other tyran­nical regimes, by embodying them. Arno Gruen, in his writ­ings on the stranger within, inter­prets the psychology of this behav­iour process exactly:
​“The Stranger in us. That is the part of us, that we have lost, and that we try to find for the rest of our lives. In our culture it is common that in child­hood, one is rejected when one doesn’t fulfil the expec­ta­tions of adults. At the same time, the child should not be allowed to live as if it were worth­less, for that would contra­dict the myth, that we do every­thing for the sake of love, that it’s all for the best. In this way being a victim becomes the source of the uncon­scious state, in that one’s own life is cast out as some­thing strange, and must be denied. This part of the self is what the person will from hence­forth be searching for. Without being conscious of the fact. It is this searching that is our down­fall.

Klaus Barbie, the Gestapo ​“Butcher of Lyon”, who tortured Jean Moulin, the French resis­tance fighter to death, told Neal Asch­erson in an inter­view (1983) that: ​“As I inter­ro­gated Jean Moulin, I had the feeling that he was me.” That is to say – what the ​“Butcher” did to his victim, he did in some way, to himself. What I am suggesting is this: the hatred of strangers always also has to do with self-hatred.

If we want to under­stand why people torture and humil­iate other people, we first have to engage with what we loathe in ourselves. For the enemy that we believe we see in other people must initially be found within. We would like to silence this part of ourselves by destroying the stranger who, because he resem­bles us, reminds us of this. That is the only way we can keep what has become estranged in ourselves, at a distance. This is the only way we can continue.3
Tanya Ury 2013

Post­script:
After secu­rity offi­cers were accused of mistreating inhab­i­tants of a North Rhine-West­phalia refugee hostel, further cases have emerged in Essen and Bad Berleburg. The photos of the asylum centre in Burbach, North Rhine-West­phalia, which circu­lated through the press, in September 2014, remind of the outrage in an Iraqi Abu Ghraib prison 2004 and confirm that people are being tortured in Germany again today – a fact that is extremely disturbing.
On a mobile phone photo, a man can be seen lying on the floor, on his stomach, with his hands tied behind his back. A guard has his foot placed on his head, while another kneels down at his side. These are like the scenes we have seen in Abu Ghraib, the noto­rious US torture prison in Iraq. But this atrocity took place in Germany, where the refugees were seeking protection.4 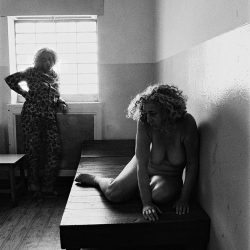 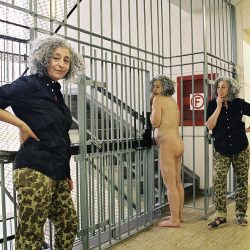