In the spring of 2011 I took part in the exhi­bi­tion ​“Kunst und Gedenken. Kölner Künstler/​innen mit Arbeiten zur Auseinan­der­set­zung mit dem Nation­al­sozial­ismus” (Art and Remem­bering — Cologne Artists and Art on National Socialism) in EL-DE-Haus, the National Socialist Docu­men­ta­tion Centre, Cologne. Inge­borg Drews, who had been a friend of Wilhelm Unger, gave a talk on the life and career of my great uncle, as part of the accom­pa­nying programme. A discus­sion ensued in which a member of the public accused the news­paper magnate Kurt Neven-DuMont, now recog­nised as having been a former Nazi, of having prof­ited in his support of Wilhelm Unger, whom the visitor named an ​“alibi Jew”.

According to an article in 2006 by Peter Kleinert in Neue Rheinische Zeitung (New Rhine News­paper) online, Kurt Neven-DuMont, who received The War Merit Cross with Swords 1st Class from Goebbel’s Reich­spro­pa­gan­damin­is­terium (Propa­ganda Ministry of the Third Reich) in 1944, had chal­lenged the Nazi leader in an article of 1st January 1933, the New Year edition of the Kölnische Zeitung (Cologne daily news­paper):
(…) ​“Hitler is impor­tant (…) He shouldn’t posi­tion himself outside the gates of poli­tics, but should shoulder respon­si­bility by putting the posi­tive ener­gies of his move­ment to good use, in prac­tical politics.”¹
Kleinert had written about a report on the Neven-DuMont research by Ingo Niebel, which disclosed that Kurt had not only been a Nazi party member, but had also acquired several houses from Jews under pres­sure to sell inex­pen­sively; these Jewish people were later deported, or escaped with their lives, to flee Germany. Alfred Neven DuMont took over the publishing house M. DuMont Schauberg, in 1953. Such facts have not only been glossed over by the inher­itor of this empire, DuMont more­over, addi­tion­ally sued the Neue Rheinische Zeitung and Niebel for their — what he consid­ered to be, defam­a­tory claims². According to the book reviewer Florian Triebel however, Manfred Pohl, who was also orig­i­nally called by the DuMonts to give evidence in the trial, more recently came to the same conclu­sions as Niebel in his publi­ca­tion of 2010: M. DuMont Schauberg: Der Kampf um die Unab­hängigkeit des Zeitungsver­lags unter der NS-Diktatur³.

In EL-DE-HAUS, the seminar participant’s anti-Semitic choice of expres­sion ​“alibi Jew” came as a shock to me. The discus­sion in the Nazi Docu­men­ta­tion Centre opened up many ques­tions for me, however. Had Germans, espe­cially former Nazis, been so without cred­i­bility that they had required at least the consen­sual support of Jews in order to func­tion in post war Germany? Was the need for posi­tion and in order to prove them­selves in a new post war culture, so great that Jewish survivors felt them­selves bound to asso­ciate with at least the allies of crim­i­nals respon­sible for their down­fall? Was this prof­fering of the hand towards former Nazis a form of recon­cil­i­a­tion, or forgive­ness that some Jews extended? Or was it purely a survival tactic, which forced Jews to cohabit with a people that had cast them out? Could Jews and former Nazis in Germany not move forward without each other’s mutual support? When I exhibit and publish in Germany, am I too an alibi Jew?

Having fled Nazi Germany to England, the British author­i­ties then deported Wilhelm Unger, as ​“enemy alien”, to an intern­ment camp in Australia, on the ​“Dunera” ship. After the war, during which both of Wilhelm’s parents survived Terezin, despite the fact that two of his sisters, Ella and Grete had been murdered in concen­tra­tion camps, Will decided to return to Cologne and become involved in the recon­struc­tion of the city. He and my grand­fa­ther Alfred organ­ised care packets, became inter­me­di­aries between the Chris­tian and Jewish commu­ni­ties in Germany and the extended commu­ni­ties of Great Britain and Germany. After escaping Germany, even though Alfred then suffered intern­ment by the British on the Isle of Man, he later made London his home, as well as Cologne; Will’s base was to be only in Cologne.

Alfred Unger had been awarded the Schiller Prize in 1930 for a theatre piece he had written in Berlin; later he did not take up a career as dramaturg in Germany but became a trans­lator of German liter­a­ture in England, while also working as Euro­pean corre­spon­dent for various German-speaking radio stations and news­pa­pers. Not many Jewish artists from Nazi Europe were emotion­ally able to again become creative, let alone success­fully estab­lish them­selves in another country, with a wholly different language to master.

Both Unger brothers had made a promising start as literary figures, in Germany, before WW2. This course of life was however, frus­trated by the events of the war and finally hindered by the conse­quent psycho­log­ical scars. Alfred and Wilhelm were never­the­less in a posi­tion to under­take many out of the ordi­nary under­tak­ings. Wilhelm had, for instance, been co-founder of the Germania Judaica Museum in Cologne.

But it was both the Unger brothers, who nego­ti­ated with Amer­ican author­i­ties on behalf of the publisher Kurt Neven-DuMont, guar­an­teeing him a new license for the ​“Kölner Stadt-Anzeiger” news­paper, after the war. The media publishing house M. DuMont Schauberg has in the mean­time become the fourth largest in Germany, having also bought shares in the Israeli news­paper, Ha’aretz. As author and jour­nalist, who had been the editor for the arts section of the Kölnische Zeitung in the 1930’s, Wilhelm Unger wrote for the ​“Kölner Stadt Anzeiger” news­paper for his entire post war career, his feuil­leton consisting of literary texts and theatre crit­i­cism. Will was a well-known and well-loved Cologne person­ality, who regu­larly held a salon at his modern pent­house flat, in Vogel­sanger Street, where artists, writers and archi­tects would discuss astrology, or matters of life and culture.

For their altru­istic post war activ­i­ties in Germany, Wilhelm and Dr. Alfred H. Unger were awarded the ​“das Große Bundesver­di­en­stkreuz des Verdi­en­stor­dens der Bundesre­publik Deutsch­land” (Commander’s Cross of the Order of Merit of the Federal Republic of Germany) respec­tively in 1969 and 1983.

The photo­graph, which I have named Alibi­jude (Alibi Jew), orig­i­nally taken by the jour­nalist Helmut Koch4 is one that I acquired from my mother and kept, long before her death in 1998. It is fortu­itous that I still have this image at all, for the bulk of the fami­lies’ photographs went missing when the Histor­ical City Archives of Cologne collapsed, in March 2009, due to negli­gence on the part of various offi­cial bodies. Along with the loss of this large Archival museum, much unpleasant evidence of recent German history will also have been mislaid, temporarily at least, a fact, which has resulted in many crocodile’s tears having been openly shed.

My reason for having put this partic­ular photo­graph aside for myself was because it epit­o­mised the strange­ness of the times — it is a sign of the time. The photo was taken during the Cologne Carnival of 1955; my grand­par­ents Alfred and Nina Unger, stand to the left wearing evening gowns deco­rated with fake carnival medals (my grandmother’s looking like a fake Star of David). In the fore­ground is the young heir to the news­paper throne, dressed in tradi­tional, pseudo medieval garb as the Carnival Prince. At the centre of the photo­graph, being clasped by the Carnival Prince are my great-grand­par­ents, Flora and Samuel Unger, who are in their 80’s. They were survivors of Terezin, two of whose chil­dren had been murdered in the camps. They appear bemused in the image, forlorn – where the Prince smiles, their faces are unsmiling. Flora, having escaped the Russian pogroms of the 19th Century, by fleeing to Germany with her mother as a child, wears no carnival garb on the occa­sion of this press photo call, but a simple scarf with paisley design. The enforced perfor­mance is a trav­esty.

Behind the Carnival Prince and his father, Wilhelm is conspic­uous by his absence, he appears to be hiding — one sees only his fore­head and hair.

Post­script:
In January this year (2012), my aunt Annette Pringle (neé Felske) came over to Cologne from the USA, after the death of her brother Gerd. They were both born before the war. She told me that she had found a copy of the very same photo­graph that I recently adopted to make an artwork of, amongst her brother’s posses­sions, but was surprised at my inter­pre­ta­tion of the image — living in Boston Annette had not yet heard of the Neven DuMont scandal some 6 years ago. She informed me that the Neven DuMonts had done much to assist family members who were in hiding in Cologne, during the war, some­thing that I had not been aware of, so that I must again review this complex, symbi­otic rela­tion­ship, between our family and that of the Neven DuMonts.

I would like to thank Dr. Jürgen Müller for discus­sion and advice in the devel­op­ment of the accom­pa­nying text to Alibi­jude.

2 ​“A Stale After­taste. The Diffi­cult Seach for Histor­ical Truths in the Case of DuMont Schauberg in Cologne – No Case of Press Freedom. ​“In their legal docu­ments his company lawyers, of the renowned chan­cellery Linklaters Oppen­hoff & Rädler, talk about ​“defam­a­tory claims” in their lawsuit against Kieser and Kleinert.” (Trans­la­tion from German Tanya Ury) mmm​.verdi​.de/​a​r​c​h​iv/20… 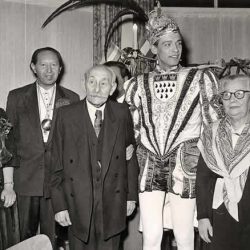