“This piece repre­sents the best of politico-histor­ical art, a sort of essay version of Sebald — a genre of crit­i­cism too little explored, prac­tised, etc. The images them­selves, as well as the way Ury has placed them within the well-docu­mented text, create an uncanny (unheim­lich) feel with respect to the twin­ning of past and future, tourism and fascism, ruin and recon­struc­tion. Not only that, but Ury tells about a real place and situ­a­tion, so that social forces are revealed which are inten­si­fied by her aesthetic vision.”

Prora near Sass­nitz, is part of a small holiday resort, Ostseebad Binz on the Prora Wiek, one of the bays on the Island of Ruegen, north Germany. Only a few kilo­me­tres of sandy beach sepa­rate them. The one, prac­ti­cally unin­hab­ited, is a ghost town that is never­the­less visited by 250,000 sight­seers each year because of its histor­ical impor­tance; the other is a tourist paradise, swarming with people, mainly in summer.

Prora, known as the Colossus of Ruegen, consists chiefly of numerous barrack-like, 6 floor-high build­ings, which were built and almost completed by the National Socialist Organ­i­sa­tion 1936 – 39 and lie at a distance of ca. 150 m from the beach. This would-be seaside health resort, approx­i­mately 4.5 kilo­me­tres in length, was constructed for the benefit of 20,000 German workers, so that they might relax with ​“Kraft durch Freude”, ​“Power through Joy” to strengthen their nerves for the coming war.

The photo series Theme Park emerged from the many images I took of Prora’s grey concrete and tile-roofed build­ings, or the exploded and ruined parts of mortar brick walls and alter­nately the older and newer holiday apart­ments, hotels, consti­tu­tional path­ways and the animated, peopled beaches of Binz. My objec­tive was to photo­graph the differ­ences, or possible simi­lar­i­ties between Prora and Binz. The outcome was a presen­ta­tion that takes the viewer on a stroll through the various land­scapes.

In December 2003 the German govern­ment (under Chan­cellor Gerhard Schroeder’s lead­er­ship at the time) gave its approval for the purchasing of the museum block, on condi­tion that the District of Ruegen and the Binz commu­nity agreed with the sale. The various groups decided they would prefer to retain the so-called Museum’s Mile however, and rejected a sale to Insel­bogen Ltd and Unicon­sulta; the Tenants’ Asso­ci­a­tion had already prepared an offer to purchase the block them­selves, in 1999. In September 2004, the Ministry of Finance never­the­less, sold parts of the premises of the National Socialist recre­ational centre Prora, and 70 Hectares of forest and open country; Unicon­sulta, an insti­tu­tion for market research, regis­tered in the Prin­ci­pality of Liecht­en­stein bought the ruins in the northern part of Prora, Insel­bogen bought Block III and adja­cent sections.

“ ​‘Should the sale be endorsed, the very centre of Prora would be presented on a plate to someone who isn’t concerned about the histor­ical impor­tance of the place.’ Rostock said that Meyer was marketing Prora as a sort of Disney­land.” Dr.Jürgen Rostock, director of the Docu­men­ta­tion Centre Prora, taz news­paper 14.12.2004 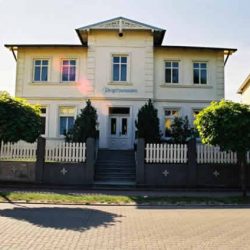 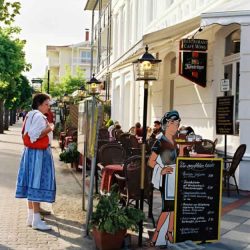 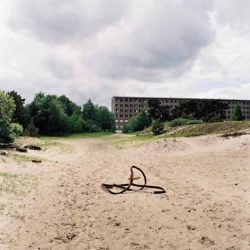 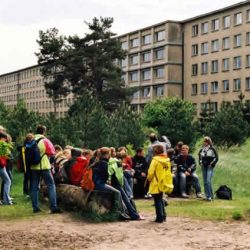