Red Hot Pokers is an imag­ined inter­ac­tion between the dictator Adolf Hitler and the philoso­pher Ludwig Wittgen­stein. Tanya Ury and Rolf Steiner read arbi­trarily chosen extracts from ​“Mein Kampf“ 1924 in English, and ​“Remarks on Colour“ 1950, written in England.

During the Third Reich every German family was provided with a copy of ​“Mein Kampf” by the state; it is now illegal in Germany to sell, own or read out in public from this book. For this perfor­mance Tanya Ury obtained her German copy, printed in Croatia from Slovenia.1

The contrast between the two texts, the former, powerful polit­ical propa­ganda, the latter, a flowery philos­ophy of language, is vast — it becomes so apparent that language games have no power against tyranny; the resulting perfor­mance, whether played in the English or German language (in German with Kristof Szabo, 16.12.2007, Kunst­bunker Tumulka, Munich), is never­the­less delight­fully absurd, although the abstrac­tion of ​“Mein Kampf“ quoted in English is most compelling.

In Ury’s perfor­mance Adolf Hitler substi­tutes Karl Popper, contender for the philosopher’s crown, in a noto­rious poker game of words with Wittgen­stein that took place during a Moral Science Club Seminar 1946, in Cambridge, England. It was the only time that the two emigrant Austrian Jews were to meet.

Wittgen­stein seeking to illus­trate a point seized the poker, hot from the fire and appeared to threaten Popper with it. While wishing to demon­strate their supremacy in the field of philos­ophy, Wittgen­stein and Popper will nonethe­less have reminded each other, of philosophy’s failure in the face of Hitler’s brute power. Was this the true cause of their conflict?

1 On returning from a journey to the USA in 2008, I was surprised to discover amongst other best­sellers, a number of copies of the English version of ​“Mein Kampf” for sale on the shelf in the New York book­shop: Borders Airport Stores. T.U.

“Our spec­u­la­tion (…), is that this ​‘one Jewish boy’ Hitler refers to, the very first link in the chain of hatred that led to Auschwitz, was none other than Ludwig Wittgen­stein. I am suggesting then, that Ludwig Wittgen­stein is referred to in Mein Kampf.

How likely is it that Hitler’s unknown Jew was really Wittgen­stein? McGuinnes notes that there was only a ​‘handful’ of Jews at the school. This is supported by Hitler’s own obser­va­tion that ​‘There were few Jews in Linz.’1 Had we known there was only one student of Jewish descent at the school, the case would be settled and there could be no doubt at all that Hitler’s Jew was Wittgen­stein.” The Jew of Linz: Wittgen­stein, Hitler and their Secret Battle for the Mind, Kimberley Cornish 1998, publ. Arrow Books Limited

“Not until my four­teenth or fifteenth year did I begin to come across the word ​‘Jew’, with any frequency, partly in connec­tion with polit­ical discus­sions. This filled me with a mild distaste, and I could not rid myself of an unpleasant feeling that always came over me when­ever reli­gious quar­rels occurred in my pres­ence.

At that time I did not think anything else of the ques­tion.

There were few Jews in Linz. In the course of the centuries their outward appear­ance had become Euro­peanized and had taken on a human look; in fact, I even took them for Germans. The absur­dity of this idea did not dawn on me because I saw no distin­guishing feature but the strange reli­gion. The fact that they had, as I believed, been perse­cuted on this account some­times almost turned my distaste at unfavourable remarks about them into horror.

Thus far I did not so much as suspect the exis­tence of an orga­nized oppo­si­tion to the Jews.

The Poker Game 2003, a further perfor­mance by Tanya Ury, in which Ury takes on the roles of both Hitler and Wittgen­stein, develops the theme of Red Hot Pokers.

Wittgen­stein, who had been awarded a medal for bravery in the First World War, was forced to buy his family out by the Second; they were consid­ered Jewish and discrim­i­nated by the Nurem­berg Laws.

The philoso­phers Wittgen­stein and Popper’s views were diverging; where Wittgen­stein aspired to deci­pher puzzles, Popper aimed to solve prob­lems. This was for him more than the mere untan­gling of linguistic equa­tions; Popper believed that philos­ophy should be prac­tical, that a philosopher’s moral duty was to assist in the real­i­sa­tion of demo­c­ratic rule. He felt that Wittgenstein’s theory of language was dangerous in its abstrac­tion and disin­terest of polit­ical actu­al­i­ties. The war was only just over; England was still living under rationing. It was cold and the only source of heat in H3, the room where the dispute took place, was from a small open fire­place. A fierce vocal exchange, which quickly devel­oped into a serious duelling of words, occurred within moments of the debate opening. Wittgen­stein seeking to illus­trate a point seized the poker, hot from the fire and appeared to threaten Popper with it. While wishing to demon­strate their supremacy in the field of philos­ophy, Wittgen­stein and Popper will nonethe­less have reminded each other, of philosophy’s failure in the face of Hitler’s brute power. Was this the true cause of their conflict?

“In Jewish terms, he (Wittgen­stein) could be seen as a tradi­tional wilder­ness-wandering tsaddik, a holy man.” (P.18: Wittgenstein’s Poker, Edmonds and Eidinow, 2001 Faber and Faber UK). Wittgen­stein, who was prob­ably a latent homo­sexual, embodied every­thing anathema to the prin­ciple in Hitler’s National Socialist civi­liza­tion.

Speech to the conclu­sion of the exhi­bi­tion ​“Dias­poras and Trou­bles”, 16th December 2007, for the perfor­mance Red Hot Pokers by Tanya Ury with Kristof Szabo

The starting point for this perfor­mance was a duel of words that took place between the philoso­phers Karl Popper and Ludwig Wittgen­stein, both Jews of Austrian origin. During this argu­ment in Cambridge, 1946, Wittgen­stein snatched up a poker to illus­trate his point. Popper felt himself threat­ened.

Tanya Ury alien­ates the conver­sa­tion that really occurred by employing biograph­ical refer­ences to Ludwig Wittgen­stein and Adolf Hitler. Both were born 1889, within the same six days, in Austrian Linz. They attended the same school — were possibly even in the same class. Tanya Ury draws on the idea of ​“the unholy twins” – she alien­ates the philoso­phers’ debate by creating an inter­ac­tion using quota­tions from Adolf Hitlers ​“Mein Kampf“ that is still banned in Germany, and Ludwig Wittgenstein’s ​“Remarks on Colour”.

With the arbi­trary choice of text passages that in no way relate to each other, a surreal testi­mony comes about: brutal polit­ical domi­nance is faced with the abstract philos­ophy of language. 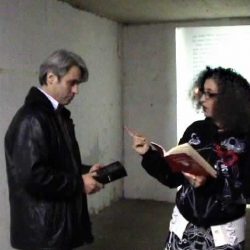 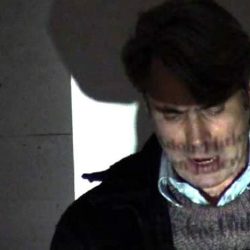 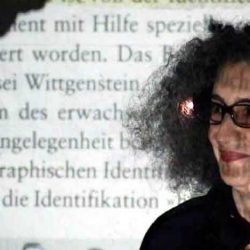 at the Kunsthaus, 6th Graz Bien­nial on Media and Archi­tec­ture (A)

2007 (23.3.) On the online Femi­nist Art Base: video trailer, The Eliz­a­beth A. Sackler Center for Femi­nist Art, The Brooklyn Museum, New York (USA)