A series of 12 texts with images have been prepared by the artist to accom­pany the photo series (2000−03); these posters inform the spec­tator of moti­va­tion and back­ground to the artwork.

Jack the Ladder is a 21 photo­graph series displayed in a ladder shape (a vertical ladder with 7 rungs over 3.5 metres high). The portrait of a young Chinese woman Echo-Ho is depicted in frag­mented images. Apart from wearing black tights, she is naked and photographed against a pre-domi­nantly red-coloured, oriental carpet. She has been painting her finger­nails. There are runs in her nylons (ladders) stopped with drops of red nail varnish, which may, on the other hand, be drops of blood. In some of the photos piles of steel nails can be seen, in others broken glass and a set of five antique English fruit knives with pearl handles.

Jack the Ladder commem­o­rates the victims of racial and sexual intol­er­ance present and past: the London nail bomb attacks of 1999 and the ​‘Jack the Ripper’ killings a hundred years earlier. 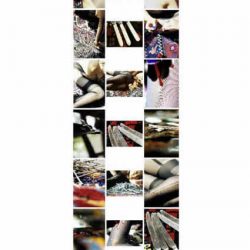 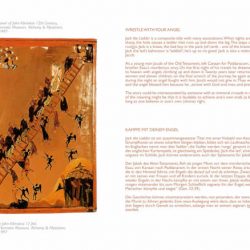 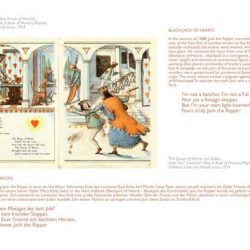 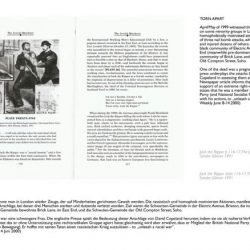 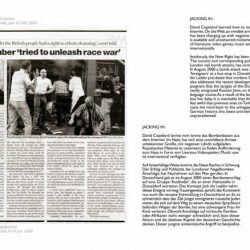 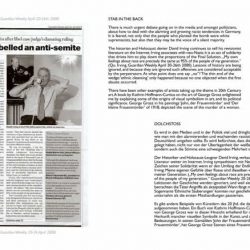 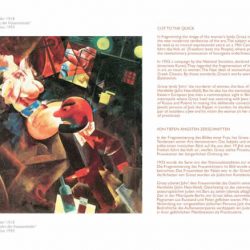 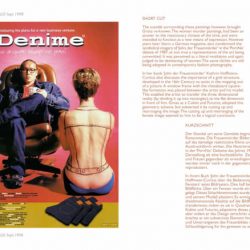 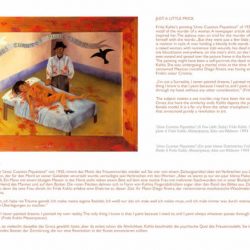 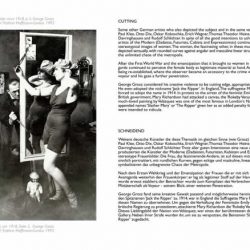 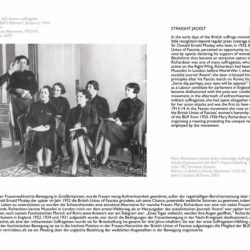 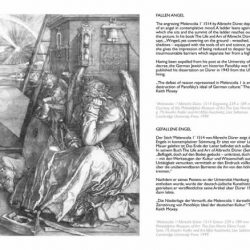 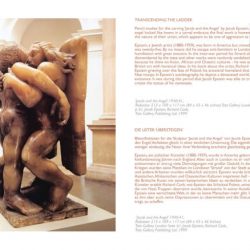 Tanya Ury, the Anglo/​German artist, who lives in Cologne, oper­ates from poles between a media conscious present and the art histor­ical archaic. She connects up biblical situ­a­tions and modern art speak with contem­po­rary social/​political and explo­sive news about bomb attacks from London to Jerusalem. 21 photographs are put together in a ​“Ladder to Heaven” motif with seven steps, in ​“Jack the Ladder” (2000). It recalls Jacob’s vision of the Old Testa­ment:

“He dreamt that he saw a ladder, which rested on the ground with its top reaching to heaven, and angels of God were going up and down it.” Genesis 28 (12)

The message of the visual frag­ments is every­thing other than heav­enly however; the ladder collapses into a labyrinth of global suffering; the model and alter ego of the work, the young Chinese Echo Ho is a fallen angel, unclothed, unpro­tected and who, trapped between inti­macy and terror, life and death, is a subject that in and for art, has become a victim of a virtual world, which can at any moment turn into bloody reality.

The Right of the Image, Jewish Perspec­tives in Modern Art

Hans Günter Golinski: To the Themes in an Exhi­bi­tion, Page 25:

Some­where in between taking sides and distancing them­selves from a life in public. The para­dox­ical situ­a­tion of artists from a Jewish back­ground, which ranges from normal to being a special case, furnishes them with a sharp­ened conscious­ness that distances them to society at large and makes them aware of the condi­tions of minori­ties. Closely connected with the above afore­men­tioned tradi­tions and the prac­tice of polit­ical wake­ful­ness in their artistic creativity, artists like Leon Golub and Nancy Spero express an unmis­tak­able social-polit­ical credo in their works, in that they bring home injus­tices with commit­ment, thereby forcing the spec­tator to posi­tion them­selves and act. The same goes for repre­sen­ta­tives of a younger gener­a­tion such as Komar & Melamit, Maxim Kantor, Moshe Gershuni, Menashe Kadishman, Penny Yassour, Roee Rosen or Tanya Ury.

Tanya Ury looks to portray histor­ical, cultural and semantic connec­tions in images and texts with the closest care to detail, in order to create a complex tableau, employing various media.

‘Jack the Ladder’ (2000), a 21-piece photo series by Tanya Ury is presented in the form of a 3.5 meter-high ladder with seven steps. The basic form of the ladder consists of a montage of frag­mented images, that from various angles convey the portrait of a young Chinese woman, Echo Ho, here also as a figure for the artist’s projec­tion. The woman raises herself up from an oriental carpet that is prin­ci­pally red. Apart from black tights, she is completely naked and engaged in painting her finger­nails red. Her nylons have runs. There is over and above the basic super­fi­cial form, a connec­tion to the title, for instead of utilizing the word ​“run” — ​“ladder”, a far more vivid (English) word is employed here. She tries to fix them (the tights) with the appli­ca­tion of nail varnish, thereby also awak­ening the impres­sion of drip­ping blood. On some of the photos one can see steel nails, on others a set of five antique fruit knives with mother of pearl handles. These strengthen the asso­ci­a­tion of wounding, or to be precise, of traces of violence. Accord­ingly an arc of tension is enfolded: the motif of the oriental carpet and the Chinese woman are to be inter­preted as romantic, trans­fig­ured exoti­cism, as projec­tions for fantasies of freedom and nomadic inde­pen­dence. The disor­der­li­ness of the pictures trans­mits a feeling of inse­cu­rity to the observer, and an ambi­guity in the sense of surre­alism or the ​‘Carceri’ by Piranesi, hereby making imag­ined scenarios of fear and violence apparent. The black stock­ings, the nail varnish and the atmos­phere of the space bring with them a sense of the erotic, so that the thematic of the used and abused woman, whose wounds, inflicted by the monster Jack the Ripper, can hereby also be read as the stages of a female Passion. The work is presented along­side a group of cited images and text commen­taries that recall victims of contem­po­rary and past racist and sexual intol­er­ance: the nail bomb attack in London of 1999 and the Jack the Ripper murders a hundred years earlier. The image of the young woman trans­ports the viewer into the milieu of saleable love that, with these asso­ci­a­tions gains a concrete back­ground. Diverse layers of meaning are woven together here. The motif of the Jacob’s Ladder makes refer­ence to the biblical lines: ​“He dreamt that he saw a ladder, which rested on the ground with its top reaching to heaven, and angels of God were going up an down it.” New English Bible, Genesis 28 (12).1 Beyond this the ladder also recalls trau­matic memo­ries and stories. The artist dreamt of the ladder motif repeat­edly in child­hood: ​“In those dreams, menac­ingly deep esca­la­tors tumbled and slid the trav­eller into an under­world, from turned-up-level steps. There were also shaky elevator construc­tions made of bare planks on building sites of Babel proportions.“2 For the artist, a descen­dant of the Berlin painter Lesser Ury, according to her own asser­tion, it is all about escaping the prescribed iden­tity of her personal biog­raphy, more exactly the fact of her German-Jewish ances­tors, who expe­ri­enced the Holo­caust first hand. She strives to confront this history, without shut­ting out her memory. ​“Signs”, according to Ury ​“are not only part of the collec­tive uncon­scious, they also belong to a value system and are there­fore symbols of a hier­archy, and a ladder…“3 Even the outward form dictates the rule of prin­cipal; the pictures them­selves appear disor­dered, with alter­nately detail and close-up photos, with the tension between emotional effect and the cold, metal surface. The upward striving geom­etry of the Ladder to Heaven is brought to life, destroyed and with its winding image path and refer­ence to the victim, wounding and repres­sion, gains the dimen­sions of a labyrinth. The ladder, the stairs and the path upward stand in direct conflict with the run in the nylons, the destruc­tion and the chaotic fringes of fabric. Apart from the ladder, the figure of Jack the Ripper is also the central connecting link. The noto­rious women murderer embodies the self-alien­ated culture of the Modern that from the perspec­tive of National Socialist and other reac­tionary powers was defamed as ​“degen­erate” and could be inte­grated into anti-Semitic smear campaigns. George Grosz saw the modern icon­o­clast and destroyer of values in this patho­log­ical figure, and with the knowl­edge of the fate and the flight of the Ury family, the Shoah might also be seen as a similar warning sign. In accor­dance with the diversely layered inter­pre­ta­tions of the Talmud, the sequences of this photo cycle are explained by the already mentioned images of the plac­ards with their literary quota­tions and narra­tives. In this way, histor­ical arte­facts, docu­ments and tracks are uncov­ered in their cultural spec­trum of meaning, in order to allow the very multi­plicity of meaning, dishar­mony and unusu­al­ness to be made visible. The ques­tioning of personal iden­tity and history connects itself with the valiant discourse around a two-faced moder­nity, whose poten­tial in poli­tics, art and society, can appear as much eman­ci­pated as destruc­tive.