The artwork doo bee doo features a photo­graphic image of the artist Tanya Ury placed under the picture of an Albert Einstein double (who doesn’t much resemble Einstein) from the German media campaign ​“Du bist Deutsch­land” (You are Germany) of 2005. Ury mimics the Einstein pose of the poster, by leaning a furrowed brow onto her left hand. Her image also copies that of the poster in that it is cut off at the lower half of the mouth.

“Du bist Deutsch­land” was an initia­tive of ​“Part­ners for Inno­va­tion” coör­di­nated by the Bertels­mann AG and involved 25 media compa­nies. The campaign ran from the end of September 2005 till January 2006. With its TV spots, posters and a budget of ca 30 million Euros, its aim was to inspire posi­tive feel­ings about the country, prin­ci­pally for the general elec­tion of 2nd October 2005.

2005 was also cele­brated in Germany as Einstein Year, the 50ieth anniver­sary of the death of the Nobel Prize winner (1879−1955). For this occa­sion, the Berlin Town Hall was deco­rated with an Einstein quote from a letter of 1920 that commem­o­rated the erst­while famous citizen of the city:

“Berlin is the place, where, because of personal and acad­emic friend­ships, I felt most at home…”

In 1933 Einstein, who was Jewish, had to flee Germany to the USA.

‘Even after 1945 Albert Einstein didn’t want to have anything to do with the land of his origin. He never saw Germany or Berlin again. His abhor­rence of every­thing German that devel­oped into an irrec­on­cil­able hate (The Private Lives of Albert Einstein, Roger High­field and Paul Carter, 1994) remained unal­tered till his death: ​“He made it clear that he didn’t want to have anything to do with the country of his birth, the inhabi tants of which, he didn’t distin­guish as being less guilty of the massacre of the Jews than Hitler. The intel­lec­tuals behaved as badly as the mass, with the excep­tion of only a handful of his closest colleagues, he said. He was convinced that the Germans were the cruellest race on earth; according to him they have the mentality of gang­sters and have demon­strated no indi­ca­tion of regret for the years of mass murder…”.

“In Germany today, this notion of ​‘promi­nent’ Jews has not yet been forgotten. While the veterans and other priv­i­leged groups are no longer mentioned, the fate of ​‘famous’ Jews is still deplored at the expense of all others. There are more than a few people, espe­cially among the cultural élite, who still publicly regret the fact that Germany sent Einstein packing, without real­izing that it was a much greater crime to kill little Hans Cohn from around the corner, even though he was no genius.” Page 84, Eich­mann and the Holo­caust, extract from Eich­mann in Jerusalem, Hannah Arendt 1963, published by Penguin Books, Great Ideas, 2005 (GB)

Einstein was born in Ulm, as were Tanya Ury’s Jewish grand­par­ents Sigmar and Hedwig (neé Ullmann) Ury, who fell victim to the Nazis. The second-gener­a­tion artist Ury, born in London, acquired dual-nation­ality in 1993, the year when she also moved to live and work in Germany.

Text to the poster: Du bist Albert Einstein (You are Albert Einstein). (Photo: Tobias Gerber, Bilder­berg, ©2005) that was widely distrib­uted in Germany 2005:

You are Albert Einstein

You think that your devel­op­ment is slower than everyone else’s? Rela­tively funny. That’s what Albert Einstein said of himself. The ​“late devel­oper” was later to win the Nobel Prize.
You really don’t need to under­stand what E=mc2 means. But one thing you should know is that to under­es­ti­mate your­self doesn’t bring anything. If you give it all you’ve got, on the other had, you can reach for the stars — in Albert’s case that was quite liter­ally.
You are Germany.

A deutscher Medien (German Media) action under the initia­tive of ​“Part­ners for Inno­va­tion.” www​.du​-bist​-deutsch​land​.de
(Trans­la­tion from German Tanya Ury)

I am Albert Einstein

Am I slow? Now they’re adver­tising German patri­o­tism in my name. Not funny. I may have been a Nobel Prize winner but back then I had to flee the country, for my life.
You really don’t need to under­stand what E=mc2 means. But one thing you should know is your history. Don’t be starry-eyed about false respect and poorly researched spin.
Du bist Deutsch­land?
doo, bee, doo, bee, doo

“Doo bee doo” is the sound made by bored people to fill silence, most often in textual commu­ni­ca­tion, but some­times verbal. It orig­i­nates from people whistling or singing a little tune when idle. 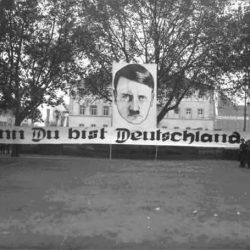 ‘…At the core of the (Du bist Deutsch­land) campaign was a so-called mani­festo, that was also central to the adver­tise­ments. The spots that were up to two minutes long, presented chiefly German celebri­ties at histor­ical scenes in the coun­try­side or city. They illus­trated the campaign slogan Du bist Deutsch­land (You are Germany) in various ways: ​“You are the Wonder of Germany”, ​“You are the Tree”, and simi­larly with sayings and metaphors like, for example, ​“Your willpower is like fire in the belly” that were to bring about posi­tive feel­ings, impress and sweep the spec­tator away.

…Many critics appeared on the scene because the campaign was aimed at indi­vid­uals as members of a nation-state. They argued that this was a nation­al­istic posi­tion similar to nation­alist thinking patterns of National Socialism. As supporting evidence, compa­rable National Socialist slogans were mentioned:

It is a fact that the National Social­ists employed a slogan, directed at Hitler, however: ​“Denn Du bist Deutsch­land” (Because, you are Germany) at a rally in 1935 on the Ludwigsplatz in Ludwigshafen. This is illus­trated in the book ​“Ludwigshafen — Ein Jahrhun­dert in Bildern” (Ludwigshafen — a Hundred Years in Pictures” of the Ludwigshafen on Rhine City Archives, 1999 (ISBN 3−924667−29−2). The sentence is posi­tioned over a large portrait of Hitler. The renowned histo­rians Hans Mommsen and Hans-Ulrich Wehler consid­ered the (Du bist Deutsch­land) campaign was never­the­less not fraught. The slogan can be found in altered form within the film ​“Triumph des Willens” (Triumph of the Will) by Leni Reifen­stahl, with the words: ​“Sie sind Deutsch­land! You (plural) are Germany (as opposed to the singular form of the campaign)”.’ de​.wikipedia​.org/​wiki/… 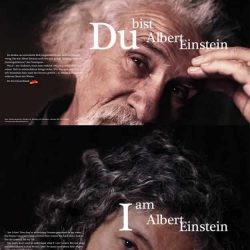