cunt prints – a collec­tion of works:

The orig­inal cunt prints, series 1 & 2, which were produced on Xmas Eve 2013 are a cele­bra­tion of femi­ninity, at a time in life, when it is appar­ently consid­ered taboo for a woman to flaunt her sexu­ality, to show her colour beyond the menopause.

The inspi­ra­tion came after observing my cunt prints from vaginal fluid and/​or semen on dark shaded bed sheets, some­time during 2011, the year in which I turned 60; and I imag­ined such cunt prints, like finger­prints, an essen­tial part of me, would be impres­sive as a stylised artwork. Like lipstick, lip prints on a servi­ette, collar or, love-letter, these cunt prints are a fleeting sign that one has lived.

Testing the idea out by mentioning it to a couple of male friends in their forties, the reac­tion of exas­per­a­tion from both caused me at first to doubt the cred­i­bility of the project, but it also reas­sured me of the impor­tance of such a femi­nist state­ment. There is a history of body painting and body prints, the most memo­rable being Yves Klein’s blue body prints, of women in the late 50’s early 1960’s.1

Despite the IKB paint­ings being uniformly coloured, Klein exper­i­mented with various methods of applying the paint; firstly different rollers and then later sponges, created a series of varied surfaces. This exper­i­men­talism would lead to a number of works Klein made using naked female models covered in blue paint and dragged across or laid upon canvases to make the image, using the models as ​“living brushes”. This type of work he called Anthro­pom­etry2.3

In her Website blog of 2011, Kirstin Russell, of the Walker Art Centre in Minneapolis (USA) cites Yves Klein’s own attempt to explain his use of the female nude:

Certainly the entire body consists of flesh, but the essen­tial mass is the trunk and thighs. It is there that once finds the true universe hidden by our percep­tions.4

This is the percep­tion of a male artist who, while creating inno­v­a­tive artwork, did not call into ques­tion the objec­ti­fi­ca­tion of a woman by exploiting her for art purposes.

“In 1976 (…) Lucy Lippard addressed the contin­uing broad dismissal of woman’s art work: ​“Men can use beau­tiful, sexy women as neutral objects or surfaces, but when women use their own faces and bodies, they are imme­di­ately accused of narcis­sism”.5

With cunt prints a ​“model” creates her own body prints, more­over from between the thighs, where a ​“true universe hidden by our percep­tions” is revealed.

1 This colour, remi­nis­cent of the lapis lazuli used to paint the Madonna’s robes in medieval paint­ings, was to become famous as Inter­na­tional Klein Blue (IKB) en​.wikipedia​.org/​wiki/… 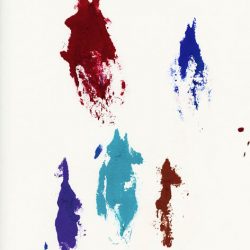 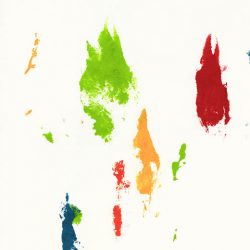