The logo refers to the expres­sion ​‘wrestle with your conscience’; the word ​‘conscience’ is however, replaced by ​‘angel’, thereby creating a connec­tion with the biblical Jacob, because he wres­tled with an angel. The word displace­ment leads one further, to consider the prob­lem­atic of Jacob’s action; was it legit­i­mate to fight for a blessing as the bible seems to suggest, or was this ques­tion­able behav­iour? Since the Western world’s moral code is based on the bible, Jacob’s code of ethics might be seen to have spawned fatal conse­quences for future gener­a­tions who, feeling legit­imised by the notion ​‘with God on our side’, achieved their goals by aggres­sive means. The viewer is like­wise confronted with her/​his own moral dilemmas. 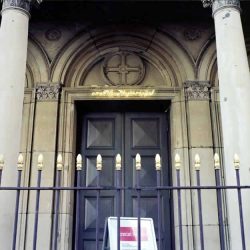