This neon sign makes light of, or sheds light on the fact of the increasing growth of neo-Nazism in Germany and the rest of Europe. In combi­na­tion with the neon sign wrestle­with­y­ourangel, the idea that it is a matter of personal choice, which side of the fence one falls, is suggested. 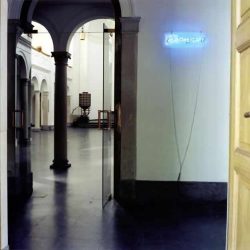