2 large banners, each with image and text (Russian and German), black and white against a grey back­ground, width 100 cm x height 100 cm, printed on Powertex Blockout mate­rial (width 140 cm x 140 height) to be presented hung on a line.

all in a name is the English title to the photo and text artwork, about the Jewish, Soviet partisan, Masha Bruskina, presented as 2 banners (Russian and German); the German title of the same narra­tive piece is the motto ​“Nomen est Omen”, from the Latin proverb ​“all in a name”. This work is also dedi­cated to Ella Unger and Grette Schie­mann, great aunts, who were deported from Cologne to concen­tra­tion camps:

“We are parti­sans and have shot at German soldiers.”

Holding the placard, with the hand-written inscrip­tion, in German and Russian is 17-year-old Maria (Masha) Bruskina — to her left and right, Kiril Trus and 16-year-old Volodia Shcherbat­se­vich, respec­tively. This photo was taken in Minsk 1941, shortly before all three were publicly hanged. Fact was that Masha had been a nurse, who had assisted wounded Red Army soldiers, by providing them with civilian clothes and papers, so that they might join the Resis­tance.1

In 2002 I gave a slide reading of my narra­tive Die Gehängten – Hung Up (1999) at ​“Jewish Resis­tance against National Socialism”, held by the Konrad Adenauer Foun­da­tion, in Bonn. At this confer­ence, the histo­rian Arno Lustiger2 gave a presen­ta­tion related to his book, during which he spoke of Masha Bruskina: ​“To Fight for Life or Death! The Jewish Resis­tance 1933−1945” was first published in 19943.

The photo­graphic portrayals of Masha Bruskina before and after being hanged were already known to me4 – they have been put into service by the media to repre­sent partisan resis­tance against the fascist hege­mony, ever and again after World War 2. But I did not know the history of these iconic images, which I had also seen more recently in the exhi­bi­tion ​“War of Destruc­tion, Crimes of the German Army 1939−45”, when it came to Cologne in 1999.

Arno Lustiger explained that the pictures of Bruskina’s execu­tion on 26th October 1941 were well known in the Soviet Union – one of these had been shown in Mikhail Romm’s film ​“Ordi­nary Fascism”, 1965. There had been no indi­ca­tion of who she was, or that she was Jewish, however. After the war this failure was not imme­di­ately reme­died – until recently the Minsk War Museum photo had been merely enti­tled: ​“Execu­tion of an unknown partisan” — Masha’s uncle, the renowned sculptor and Soviet Member of Parlia­ment Sahir Asgur, had been forced to silence on the iden­tity of his niece for decades5. And so, due to Soviet anti-Semi­tism, Masha Bruskina, who had been a very young Jewish partisan, remained anony­mous, till after the cold war.

I checked my copy of the exhi­bi­tion book ​“War of Destruc­tion, Crimes of the German Army 1939−45”, Hamburger Edition 1995, only to discover that here only images6 of the hang­ings were shown and had also been titled without personal details.

After writing to Arno Lustiger in 2003 about the failure to iden­tify Masha Bruskina, he replied that he had in fact been in contact with Hannes Heer and Klaus Naumann, the editors of the accom­pa­nying German Army exhi­bi­tion book but had merely come up against a brick wall. Deplorably, the iden­tical over­sight still exists in the 2004 CD-ROM edition of the same book7.

In 2008 I was on a panel together with Catherine Plum, of Western New England College, USA at the Popular Culture Asso­ci­a­tion confer­ence in San Fran­cisco. In her lecture she spoke of 18-year-old Zoya Kosmode­myan­skaya, who had been executed for her activ­i­ties as a partisan. The image of her hanging that Plum showed us bore simi­lar­i­ties to Bruskina’s tragic portrait. Kosmode­myan­skaya was however, soon acknowl­edged as a hero of her nation — a children’s pioneer camp, the optional educa­tional choice in the Soviet Union that taught the history of anti-fascism, as well as lead­er­ship skills, had been named after her.

In Germany: ​“Since the 1970s, Sophie Scholl from Ulm has been cele­brated as one of the great German heroes who actively opposed the Third Reich during the Second World War.”8 Several films have been made about her life and death. On 22nd February 1943, Scholl was guil­lotined, at the age of 21 years, for distrib­uting paci­fist leaflets with the ​“White Rose”, a non-violent anti-fascist, Resis­tance group.

Up to 2009, Bruskina’s name was not acknowl­edged on the memo­rial plaque at the execu­tion place. Instead she was referred to as ​“the unknown girl”. However, since 2009, a new memo­rial plaque at the execu­tion place has been placed. The Russian inscrip­tion now reads ​“Here on October 26, 1941 the Fascists executed the Soviet patriots K. I. Truss, V. I. Sherbateyvich and M.B. Bruskina”.9

Unlike Kosmode­myan­skaya and Scholl, Bruskina was not even granted an iden­tity, until well after the Soviet Union collapsed, but also not in the most signif­i­cant German histor­ical archival work on the 2nd World War10. Masha’s image was powerful and success­fully instru­men­talised as propa­ganda by the Soviet Union. She and her family were however power­less to correct the half-truths of the revi­sionist image that was presented to the world. Even now recog­ni­tion of this young Jewish Soviet partisan remains modest.

1 ​“The scene of their deaths was captured in a series of powerful photographs taken by one of the Lithuanian Wehrmacht collab­o­ra­tors.” www​.execut​ed​today​.com/… 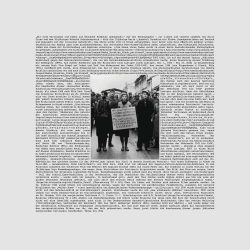 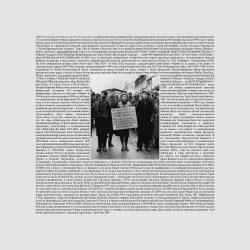 2017 (3.7.) Personal state­ment by Tanya Ury on her Who’s Boss, nomen est omen artworks and Katy Deepwell’s n.paradoxa publi­ca­tion, on its 20th anniver­sary, at a special confer­ence on Local and Global Dynamics in Contem­po­rary Art at the Univer­sity of Middlesex, London (GB)